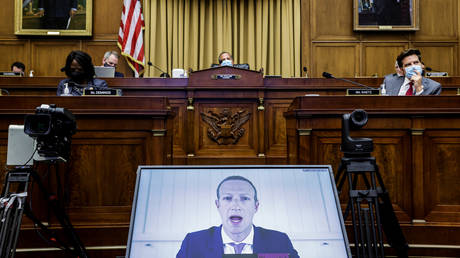 “We’re able to proactively identify 89 percent of the hate speech that we take down before, I think, it’s even seen by other people,” Zuckerberg told the Antitrust Subcommittee of the US House of Representatives on Wednesday.

The statement was in response to Rep. Jamie Raskin (D-Maryland) pressuring Facebook to “join the civil rights movement” by submitting to the demands of the Stop Hate For Profit campaign, an advertising boycott accusing Facebook of tolerating “widespread hate” on the platform.

Zuckerberg defends efforts to stop election threats from other countries and to fight hate on Facebook.He says Facebook identifies 89% of hate speech before it’s posted pic.twitter.com/JPT5lATiLo

Facebook has been under growing pressure since the 2016 election, with Democrats blaming it for Hillary Clinton’s loss to Donald Trump. Raskin repeated those accusations at the hearing.

Also on rt.com
Trump demands Congress ‘bring fairness to Big Tech’ or he’ll do it himself, ahead of antitrust hearing with four CEOs


Zuckerberg argued that Facebook has built “defenses” since 2016 that now amount to “some of the most advanced that any company or government has in the world.”

We routinely collaborate with law enforcement and intelligence agencies, and are able to sometimes identify threats coming from other countries before governments are even able to.

Having tens of thousands of employees has a downside, though – as Zuckerberg admitted to Rep. Matt Gaetz (R-Florida), who grilled him over Project Veritas video evidence from two  whistleblowers talking about a “culture” inside Facebook that discriminated against conservatives.

“People make mistakes” and have their own goals, Zuckerberg replied.


In addition to Zuckerberg, Wednesday’s unprecedented virtual hearing in the House has featured the CEOs of three other major US tech companies: Apple’s Tim Cook, Amazon’s Jeff Bezos, and Google’s Sundar Pichai.

Footage from a church mid-explosion brings hope to Beirutis