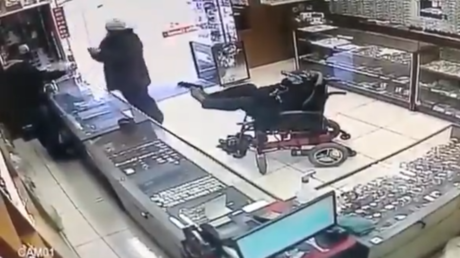 A bizarre robbery attempt at a jewelry store in Brazil has been captured on film, in which a disabled man held a cashier at gunpoint – clutching the weapon with his feet. The would-be thief was eventually brought to heel.

The unusual incident unfolded in the Brazilian town of Canela on Monday. Security camera footage of the ill-fated heist shows a wheelchair-bound, medical mask-clad man rolling into the jewelry shop before trying to rob it.

According to local media, the 19-year-old suspect handed a note to the cashier, instructing him to stay calm and fork over the cash. But apparently interpreting the demand to be some sort of joke, the store clerk ignored the disabled criminal.

The attacker – who also happens to be mute – then produced a gun to reinforce his written statement and prove it was no prank. As the man’s arms do not work, he grasped the gun with his feet, at one point even cocking the weapon with his lower limbs to drive the point home further.

Also on rt.com
Boomerang effect: Burglar knocks himself out with a rock he threw to break store window (VIDEO)


Still, the robbery attempt was unsuccessful, as police were soon called to the scene to apprehend the suspect, who apparently didn’t make it very far. Apart from his gun – which turned out to be a plastic toy – the man had also stashed a large kitchen knife in his wheelchair.

The suspect was promptly released after the booking, as law enforcement deemed him an unlikely flight risk, given his condition. He now faces charges for attempted robbery.

Timeline of Rayshard Brooks’ death, protests and fallout from incident at Atlanta Wendy’s