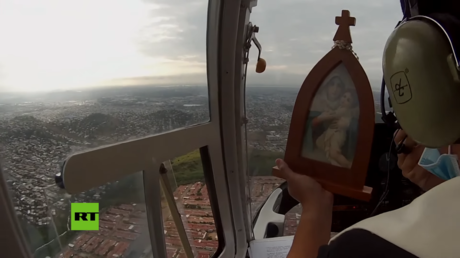 A Virgin Mary image was flown above Guayaquil, Ecuador in a helicopter, marking the end of a pilgrimage – which was held virtually this year as the city is the worst affected by Covid-19 in the country.

Usually, it’s the worshippers who line up to a shrine, sometimes waiting for hours to receive a blessing. However, this year in Guayaquil, it was the Virgin Mary herself who set off on the ‘Route of Health’ pilgrimage, flying over the city on Saturday.

The local chapter of the Schoenstatt Apostolic Movement was behind the flyover.

“We thought about the possibility, at the beginning only as a possibility, of making this flight over the city. But we especially approached the hospitals, and the iconic churches of Guayaquil, to tell everyone that, even though on each pilgrimage the faithful go to visit Mary at home, now she is the one visiting,” Eduardo Auza, Diocesan coordinator of the Schoenstatt Movement, said, as cited by RT’s Ruptly video agency.

The flyover concluded a virtual pilgrimage in which the faithful visited Guayaquil’s Schoenstatt chapel online instead of walking to the shrine to arrive there at dawn. The traditional pilgrimage was scrapped as the coronavirus crisis ravages the city.

While there have been well-documented reports of overcrowded hospitals lacking basic supplies, bodies decaying on the streets, mortuaries running out of space, and relatives struggling to bury their loved ones for weeks, or even worse – not able to retrieve their remains due to the chaos – government data indicates that 533 people died of the coronavirus in Guayaquil in March and April combined.

Many argue that the death toll is vastly underreported, as there has been a dramatic spike in deaths in the city compared to the same period last year. This year, 12,350 died in April and March, while last year, less than 3,000 died.

Also on rt.com
‘We have to wait for a patient to die so others can use his bed & ventilator’ – doctor in hardest-hit Ecuador city to RT


In the meantime, the problem of missing remains has grown so severe that an investigation into the mishandling of hospital morgues was launched last month. Apart from that, a special website where people can search the names of their deceased relatives has been set up. If a body is found by the authorities, the information is uploaded to the site.

On the surface, the situation in Ecuador as a whole does not seem dire. According to official data, it has only registered 30,000 cases and just over 2,000 deaths, lagging far behind the worst-affected nations.

At the same time, Ecuador’s death/recovery ratio is not very encouraging – about 3,500 people have recovered so far. The nation of 8.6 million has conducted around 80,000 coronavirus tests, with reports on the ground suggesting the situation could be considerably worse than on paper.

Trouper that she is, Kerri-Anne Kennerley is expected to rejoin the cast of the musical Pippin for one final encore

James Packer in no hurry to leave Caribbean