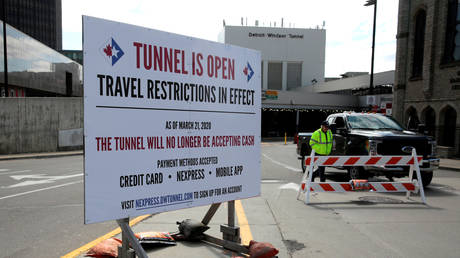 US President Donald Trump has signed an executive order putting new restrictions on foreign work visas until the end of 2020, a move the administration said is needed as the economy suffers in the wake of Covid-19 lockdowns.

Signed on Monday evening, the order freezes several types of work visas – including the H1B for highly skilled workers – which the White House says will keep some 500,000 American jobs from going to foreign employees, part of what it deemed an “America-first recovery.”

“American workers compete against foreign nationals for jobs in every sector of our economy, including against millions of aliens who enter the United States to perform temporary work,” the White House said in a statement.

But under the extraordinary circumstances of the economic contraction resulting from the Covid-19 outbreak, certain nonimmigrant visa programs authorizing such employment pose an unusual threat to the employment of American workers.

Though agricultural workers and some health care and food chain personnel are exempt from the restrictions, the freeze also applies to H4 visas – granted to family members of H1B holders – and L visas for foreign workers at US-based companies. Certain temporary workers and those participating in work or study exchange programs are also barred entry under the order.

Also on rt.com
Another 1.5 million Americans have applied for unemployment


A 60-day freeze on certain categories of work and family-based immigration visas ordered in April will now also be extended until the end of the year, when the rest of the new restrictions are set to expire. They will not apply to immigrants already living and working in the US, however, nor to permanent residents seeking to gain citizenship.

In a call with reporters earlier on Monday, the administration said the order would safeguard American jobs amid unprecedented unemployment, largely driven by coronavirus-related lockdown measures which shut down large swaths of the US economy beginning in March. While a number of states have moved ahead on plans to reopen, some areas of the country are seeing a resurgence in the virus, stoking concerns about a ‘second wave’ and the possibility of new lockdown measures to contain it.

How Qld border switch could backfire

Candice Warner opens up on home life after SAS bombshell

Top 5 Hindu Forums, Discussions and Message Boards You Must Follow in 2020 New Jobs