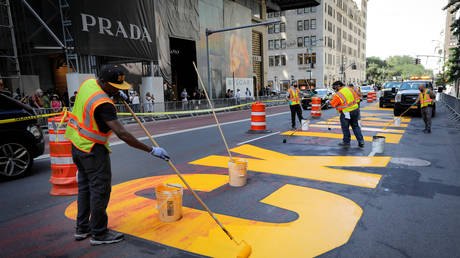 At least two people were arrested after vandalizing a Black Lives Matter mural near Trump Tower in New York City, prompting a heavy police response and a face-off with activists in the mural’s second defacing in a matter of days.

A group of some 10 people gathered around the art installation in New York City’s Midtown on Friday – a massive street painting of the words “Black Lives Matter” – splashing blue paint across part of the mural. The incident was captured in footage shared to social media.

One of those reportedly taken into custody wore a shirt with the words “All Lives Matter” and donned a rainbow flag that reads “LGBT for Trump.” The same woman appears to have been photographed near the mural earlier this week, where she was seen arguing with other activists.

After dumping paint on the street and chanting “All lives matter,” other activists confronted the vandals, some heard screaming “Why would you do this?” while others hurled abuse at the paint-throwers. The brief show-down was broken up when more than a dozen police officers arrived on the scene moments later, making two arrests and blocking off a portion of the street, according to local media. It is unclear what charges the vandals might face, if any.


The incident marks the second act of vandalism against the mural this week, with an unidentified man seen pouring a can of red paint atop the street art on Monday, prompting Mayor Bill de Blasio to take to Twitter soon after to declare the city had already repaired the damage, telling his followers that BLM “is more than words, and it can’t be undone.”

Following the first incident, the NYPD was placed on high alert around the mural, according to both a former police commissioner and Republican gubernatorial candidate Derrick Gibson, who said officers were “getting paid to babysit paint, and not happy about it.” The move reportedly saw three police sergeants and 24 officers stationed around the mural, drawing a wave of criticism that city resources were being wasted to protect a piece of art despite a dramatic uptick in shootings and other violent crime in recent weeks.

Top 5 Peacock Forums, Discussions, and Message Boards You Must Follow in 2021 New Jobs

In row with Amir, Hafeez comes out in support of Misbah, Waqar