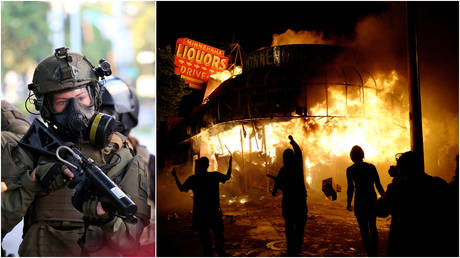 US President Donald Trump has boasted that Minneapolis would have been wiped off the map had he not urged the Minnesota government to deploy National Guard troops to quell riots and looting following the death of George Floyd.

“If I didn’t demand that National Guard Troops go into Minneapolis after watching how poorly the Liberal Democrat government was handling things, you wouldn’t even have a Minneapolis now. Once they were deployed, in force, all looting, burning and crime stopped DEAD!” Trump said in a tweet on Thursday, adding in another post“Next time call up the National Guard much sooner.”

If I didn’t demand that National Guard Troops go into Minneapolis after watching how poorly the Liberal Democrat government was handling things, you wouldn’t even have a Minneapolis now. Once they were deployed, in force, all looting, burning and crime stopped DEAD!

The missive was immediately met with a wave of ‘fact-checks,’ noting that the Minnesota state government, not the president, is responsible for National Guard deployments, with critics insisting Trump deserves no credit for the move.

National Guard is handled on the state level. You didn’t deploy anything. You’re grasping at straws just like you did with the depression-level unemployment rates.

Uh…it was the Governor, Tim Walz, who called in the National Guard. As governors do. Not you.

While Trump did call for Guard troops to be sent into the city as anti-police brutality protests there escalated into rioting and destruction – even threatening to take action himself should the situation spiral further out of control – by that point Minnesota Governor Tim Walz had inked an executive order authorizing a deployment. The order was quickly acknowledged on Twitter by the state’s Guard, hours prior to the president’s first post on the matter. Walz’s office also insists the decision was made at the request of the mayors of Minneapolis and nearby St. Paul, rather than Trump, however the two did speak by phone prior to the deployment. It remains unclear what was said on the call, and Walz has refused to clarify whether troops were a subject of discussion.

Also on rt.com
‘When the looting starts, the shooting starts’: Trump says military is ready to act against Minneapolis ‘THUGS’

Lewandowski not interested in Ronaldo record as he eyes ‘dangerous’ Barcelona

Karachi winters expected to be longer this year: PMD