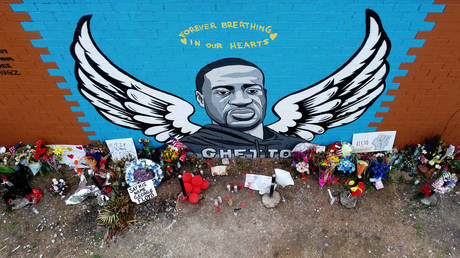 The judge overseeing the trial of four Minneapolis cops accused of killing black security guard George Floyd has placed a gag order on the defendants and their lawyers after pieces of somewhat exculpatory evidence were released.

Citing the risk of “tainting a potential jury pool” and “impair[ing] all parties’ right to a fair trial,” Hennepin Country District Judge Peter Cahill slapped a gag order on “all parties, attorneys, their employees, agents or independent contractors working on their behalf” on Thursday with regard to the trial of the four Minneapolis cops charged with killing Floyd. The 46-year-old security guard died on Memorial Day after city police officer Derek Chauvin kneeled on his neck for an excruciating eight minutes while he begged for mercy.


The unusual order prevents anyone involved in the case from sharing “opinions, strategies, plans, or potential evidence” with the media or the public. It came less than 48 hours days after former officer Thomas Lane’s defense attorney filed a motion to dismiss the case against his client, arguing the rookie cop had repeatedly urged Chauvin to roll Floyd onto his side, had a restricted view of what his senior colleague was actually doing, and later even performed CPR in an attempt to revive the unconscious security guard.

Lane, along with former officers J. Alexander Kueng and Tou Thao, is facing charges of aiding and abetting murder and manslaughter, while Chauvin himself faces charges of unintentional second degree murder, third-degree murder and second-degree manslaughter. During the botched arrest, Lane was holding onto the handcuffed man’s legs, while Kueng held his back and Thao stood in front of the prostrate detainee, keeping the filming onlookers at a distance.

While defense attorney Earl Gray has filed body camera footage from Lane and Kueng as exhibits intended to exonerate his client, the videos have not yet been made available on the court website, even as the lawyer has insisted “the public should see it,” explaining the footage “shows the whole picture.”

“If they watch the whole thing, people…couldn’t cherry-pick parts of it,” Gray explained to local media. “Showing just the last little piece there is not fair.” A court spokesman said the videos would be made available for viewing at “a later date,” not specifying when.


Upon issuing the gag order, Judge Cahill reiterated that all public documents can be seen on the state website and evidence is available at the courthouse – though it’s unclear what restrictions are in place due to the Covid-19 pandemic that might hamper efforts to examine those materials.

An autopsy showed that Floyd’s heart stopped as Chauvin restrained him, and listed heart disease, fentanyl intoxication, and recent methamphetamine use as “other significant conditions” which may have contributed to his death.

All four officers were fired in the week following Floyd’s death, which kicked off months of protests against police brutality and racism across the US that have been accompanied in many cities, including Minneapolis, by rioting and violence.

Gray and the other defense attorneys accused Minneapolis Mayor Jacob Frey and Police Chief Medaria Arradondo as well as Minnesota Governor Tim Walz and Attorney General Keith Ellison of prejudicing potential jury members themselves, pointing out that they have repeatedly referred to Floyd’s death as a “murder.”