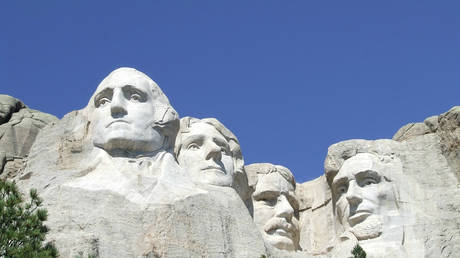 It has come to a face-off between the National Guard and protesters blocking the road to Mount Rushmore, which is set to host US President Donald Trump’s rally, after they refused to back down. Arrests have been reported.

With several hours left until Trump’s ‘Salute America’ event to mark Independence Day at the Mount Rushmore National Memorial in South Dakota on Friday, an estimated 200 to 300 protesters have effectively made the road leading into the venue impassible.

Indigenous protesters at Mount Rushmore (sacred Lakota land) have removed the tires from the large white vans in the background, creating a road block that will be very difficult to move.🎥: @EEBormettpic.twitter.com/o5Qc5Fgrn0

The protesters parked several vans in the middle of the road and blew out tyres on them so they cannot be easily removed by law enforcement.

Videos of the standoff show protesters climbing the vans and waving banners.

A popping sound, that resembles that of a gunshot or a minor blast, can be heard on some of the footage.

It appears to be the result of the protesters’ effort to disable the vehicles, however.

The National Guard has been spotted arriving to the scene.

Footage from the scene show them engaging the protesters, as they refuse to scatter on their own.

#BREAKING: National guard is working to disperse protesters who have formed a blockade leading to Mount Rushmore where President Trump will deliver a 4th of July speech. pic.twitter.com/XeZaTdLwka

This One Thing May Already Be Keeping You Safe From COVID, Researchers Say