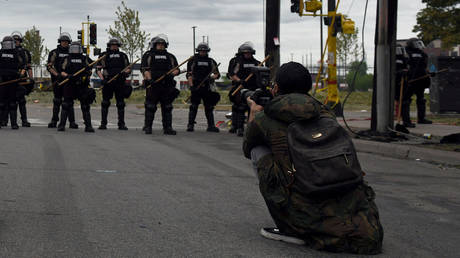 With a curfew imposed over Minneapolis after days of protests and rioting, city officials appear to have forgotten about the First Amendment, making no exception for reporters on the ground before hastily “rectifying” the order.

The curfew declared on Friday initially made no exemptions for journalists, allowing only emergency workers and law enforcement to be on the streets after the order comes into effect at 8pm.

Responding to an outpouring of concern over press freedom, Minneapolis Mayor Jacob Frey said he was coordinating with the state government to ensure journalists do not face the penalties threatened for curfew violators, which include arrest, fines and even jail time.

An amended order was published later on Friday, with a bolded addition noting “members of the news media” and those “traveling directly to and from work” were now exempt from the curfew, now reflecting the language of a parallel declaration issued by Minnesota Governor Tim Walz.

How is this not unconstitutional?

Prior to the revision, the order drew intense backlash online, with critics dubbing it “authoritarian” and a violation of First Amendment protections for reporters.

Before the curfew was even declared, a CNN crew covering the protests was taken into custody early on Friday morning, with reporter Omar Jimenez led away in handcuffs live on television. While the officers offered no explanation for the arrests on camera, they later said the crew failed to comply with an order.

How Qld border switch could backfire