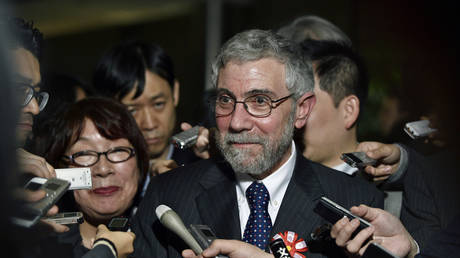 New York Times columnist Paul Krugman has been accused of exhibiting “symptoms of psychopathy” after seemingly cheering the possibility that a growing number of elderly Floridians could fall victim to coronavirus.

The acclaimed wordsmith and economist had a rather unusual take on the rise in Covid-19 cases in Florida.

“Reality is coming for white supremacists driving golf carts,” Krugman declared in response to a Bloomberg report detailing how Florida’s elderly population was likely at increased risk of perishing from the virus.

The provocative remark was possibly in reference to a viral video in which members of a Florida retirement community exchanged barbs with anti-Trump protesters. Driving in golf carts, one of the elderly counter-demonstrators can be heard shouting “White power.” The president shared the clip on Twitter but quickly deleted the post after being bombarded with condemnation. The White House claims that Trump didn’t hear the incendiary slogan.


Krugman’s radical analysis received poor reviews from pundits and social media users. Glenn Greenwald described the NYT columnist as “sociopathic,” while others accused him of “openly wishing for the death of Florida’s senior citizens.”

So when are people on the left here on Twitter going to admit that Krugman has become a monstrous ghoul? pic.twitter.com/4iqe26vMBM

Even some of Krugman’s former fans said that the famed economist had crossed a line.

When I was an econ major in the 1990s, Krugman was brilliant, creative, & often bipartisan.Now he’s just an old crank. Ad hominem, unhinged, hyper-partisan, nasty.His book “The Great Unraveling” should have been an autobiography. (“Arguing with Zombies” also applies to him) https://t.co/QdM5gAn8jk

This is not the first time debate has raged over statements made by people who seemingly believe the coronavirus only targets those with politically incorrect viewpoints. Self-declared health experts have been sharply criticized for encouraging Black Lives Matter protests, while simultaneously condemning other demonstrations, especially those against lockdown measures.