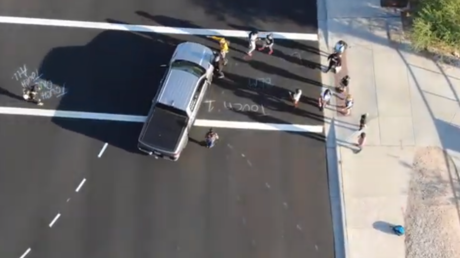 Three protesters have been arrested by the Tempe Police Department after footage filmed by a drone was used as evidence of their crime, signaling a new frontier in how the world is policed.

The activists took to the streets to organize a ‘chalk walk’, which involves writing on the pavement and road in chalk, in a show of solidarity with the Black Lives Matter movement.

The arrests were made after an altercation occurred between the protesters and a passing gray pickup truck. Police say that two of the three protesters damaged the vehicle as it tried to pass, while the other was arrested for preventing the police from making the initial arrests.

Angry protesters demanded that the police department provide proof of the charges, so on Monday, Tempe police posted a drone video onto YouTube showing the events of the day.

The Tempe Police Department said that “two of the protesters (a male and a female) began physically striking and throwing items at the victim’s vehicle, causing noticeable damage.”

However, protesters say the truck was the culprit, and that it was attempting to run them down.

This rather small incident reflects changes that are occurring in how states surveil and police their populations.

Earlier this month, a Philadelphia woman wanted for damages during a BLM protest was tracked down and caught by the FBI after they followed her digital footprints across LinkedIn, Etsy and social media.

Also on rt.com
FBI arrests BLM protester after tracking her across LinkedIn, Etsy and social media


The culprit’s lawyer at the time told local news outlet the Philadelphia Inquirer that his client’s arrest signaled that social media has “become a fertile ground for government surveillance.”

However, though new technologies bring new solutions and problems, it is unclear how much help Big Tech will lend to the police in the future.

In response to the BLM protests earlier this month, major tech companies such as IBM, Microsoft and Amazon have stopped letting police departments use their facial recognition technologies.

10 picnickers from Karachi die as boat capsizes in Keenjhar lake

News Agha Salman and Kamran Ghulam are the other two players dropped from the original list Agha Salman, Abdullah Shafique

Sarfaraz ‘wants to have a body like Faf du Plessis’, Shadab says ahead of Pak vs SA Test