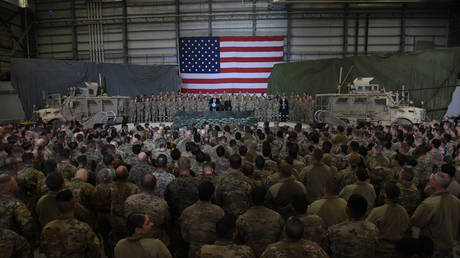 The Russian Foreign Ministry has rejected a US media report claiming Moscow offered to pay jihadi militants to attack US soldiers in Afghanistan. It said such ‘fake news’ merely betrays the low skill levels of US spy agencies.

Citing US intelligence officials – unnamed, of course – the New York Times reported that, last year, Moscow had “covertly offered rewards” to Taliban-linked militants to attack American troops and their NATO allies in Afghanistan.

On Saturday, the Russian Foreign Ministry dismissed the NYT story as “fake information.”

This unsophisticated plant clearly illustrates the low intellectual abilities of the propagandists from  US intelligence, who, instead of inventing something more plausible, resort to conjuring up such nonsense.

“Then again, what else can one expect from intelligence services that have bungled the 20-year war in Afghanistan,” the ministry said.

Moscow has suggested that this misinformation was “planted” because the US may be against Russia “assisting” in peace talks between the Taliban and the internationally-recognised government in Kabul.


US-led NATO troops have been fighting the Taliban in Afghanistan since 2001. The campaign, launched in the wake of the 9/11 terrorist attacks, has cost Washington billions of dollars and resulted in the loss of thousands of American soldiers’ lives. Despite maintaining a military presence for almost two decades, the US has failed to defeat the Taliban, which is still in control of vast swaths of the country.

Moreover, the office of the Special Inspector General for Afghanistan Reconstruction has compiled several reports detailing how tens of millions of US taxpayers’ funds have been spent on dubious regeneration projects.