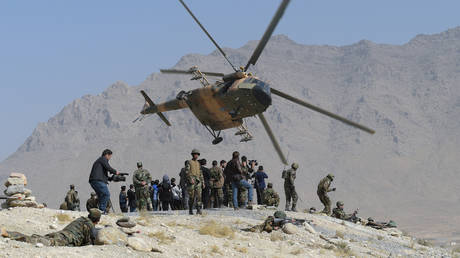 The sitting government in Kabul was the sole entity on Afghan soil to have received Russian arms, Moscow stated, the day after Mike Pompeo bluntly accused it of funneling weapons to the Taliban militants.

“Russia has only supplied arms to the legitimate government of Afghanistan – something that is well known”, Foreign Ministry spokeswoman Maria Zakharova told reporters on Thursday.

The diplomat was taking aim at Secretary of State Mike Pompeo, who pulled no punches when talking about Russia this Wednesday.

“The Russians have been providing weapons to the Taliban for an awful lot of years, so this is an ongoing challenge,” he told Fox News.


In a media briefing earlier in the day, he insisted Moscow was behaving in Afghanistan “in a way that’s adverse to the United States.” “We have objected to that … when I meet with my Russian counterpart [Sergey Lavrov], I talk with him about this each time, [saying] ‘Stop this’,” he recalled.

Zakharova ruled out any discussion of such an issue ever having cropped up during Pompeo’s one-on-ones with the Russian foreign minister, however.

“Mr Pompeo has never raised this question during his meetings with Mr Lavrov,” she stated.

The verbal ping-pong comes after the New York Times alleged Russia may have paid bounties to Afghan militants for killing US troops. Subsequently spread by a host of other US media, the allegations – based on anonymous sources – suggested the Trump administration knew but did nothing.


US intelligence services said there was insufficient evidence in support of the allegations, and they were also immediately rebuffed by President Trump.

In a previous response, Moscow brushed the report aside as a poorly conceived piece of disinformation meant to distract from the US problems in Afghanistan.

Subscribe to RT newsletter to get stories the mainstream media won’t tell you.

You’re probably more awkward after quarantine, but not because your social skills are gone

Sofia, January 28 (BTA) – Bulgaria is last in the EU, along with Hungary and Romania, in terms of coping with

Limited spectators will be allowed in stadiums, reveal sources