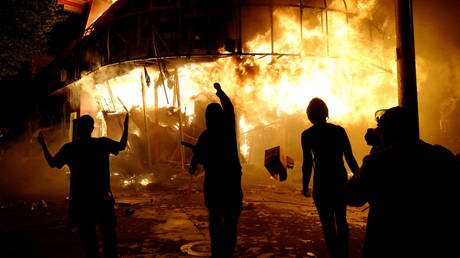 The St. Paul Police Department has categorically denied one of its officers escalated the Minneapolis riots by smashing the window of an auto parts store while undercover, after social media sleuths claimed to have identified him.

So we also want to be perfectly clear about this: The person in the video is not our officer.

Our officer? He’s been working hard, keeping people and property safe, and protecting the right to peacefully assemble. It’s sad that people would post and share this untrue information, adding more confusion to an already painful time in our community.

The official denial only served to pour more fuel on the fire, however.
The AutoZone was the first building to be torched, shortly after its windows were smashed.

You need a new social media manager. A professional.RUMOR CONTROL? That’s clearly your priority.So your Dept has never had an officer by that name? It would be nice if you could be transparent rather than angry and defensive.

While demonstrators around the man immediately suspected he was a cop (and even asked him as much after he grabbed at the phone of the person filming him), the attempt at identification came later, after his image was spread all over social media. A woman claiming to be his ex-wife came forward saying she recognized not only him, but also the respirator and gloves he was wearing.

The rumors metastasized, with Pederson blamed for everything from burning down a Target store that was looted to spray painting “Free s**t for everyone zone” on the AutoZone that was also burned down. By Friday, Pederson’s name was all over social media, with many calling for him to be brought up on charges of inciting the riots.

…protestors, threatening them, and then walking straight into the precinct where only authorized personnel would have been allowed. The police are literally trying to instigate shit to make people lose their minds. This is infuriating!! I can not believe what I’m seeing!

Protests that began on Monday after white police officer Derek Chauvin was caught on video choking George Floyd, a handcuffed black man, to death by kneeling on his neck for seven agonizing minutes, ignoring his and onlookers’ cries for help, soon spiraled out of control as a small faction of demonstrators began breaking windows and spraying graffiti. Police responded with rubber bullets and tear gas, and fires and looting broke out not long after.


The chaos has provided fertile ground for disinformation, however. Claims that looters had attacked a helpless old woman in a wheelchair unprovoked were soon challenged by videos showing the “old woman” apparently stabbing people. A photo circulating on Twitter that supposedly showed Chauvin in a “Make Whites Great Again” baseball cap was also revealed to be fake, as the man in the photo was not Chauvin.

The maid has reportedly gone missing, Lahore police say body has been moved to a morgue for post-mortem Source link