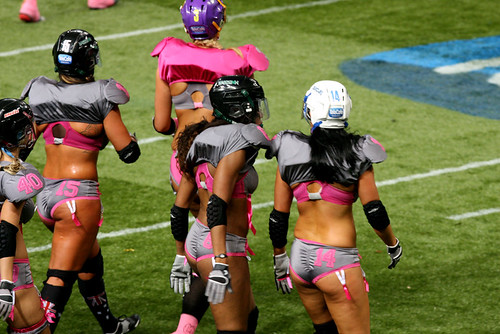 All Phones Arena was blessed with the privilege of staging the first game in Australia.

What was on offer? – tits and ass of course, and a good spread of athletic talent. We really enjoyed the girls individual celebrations after they scored the all important touchdowns, made even more visually titillating with spray tan thanks to the all important sponsor – Mobile Spray Tanning.

If your into NRL you might be into this, and if your into pro wrestling aka sports entertainment, you will probably have a strong appreciation of this unusual, titillating and exciting sport that seems to be perfect for a good number of Australian alpha males.

Well done players and promoters for putting on a heck of a show. Looks like this special brand of footy has already developed more than just a grass roots fan base down under in Australia.

The 2012 LFL All-Star Game will feature 32 of the most athletic and beautiful women across the league as the Western and Eastern Conference teams clash in front of projected capacity crowds in Sydney and Brisbane, two cities that the LFL has identified as being potential homes for two of the franchises in 2013. Expect these games to be as explosive, combative and competitive as all the LFL games are as each player strives to impress for selection into the teams in 2013.

LFL Football, described at the ‘ultimate live sports experience’, has developed one of its largest international fan bases in Australia having developed a cult-like following on Australian broadcaster Fuel TV since the league’s inception in 2009. As much success as the LFL has enjoyed in the US, internationally the appetite for LFL Football has been even greater being broadcast in nearly 43 countries and drawing near capacity crowds in previous international game play in Mexico and Canada. The appeal internationally has been strong enough for the LFL to announce the formation and kick-off of several international leagues to include LFL Canada (Fall 2012), LFL Australia (Summer 2013) and LFL Europa (2014).

Newsflash: Federal Minister for Sport Kate Lundy Is Not A Fan!…

Women of the match?

Chloe Butler and Liz Gorman seemed to get over pretty well with the Sydney fan base. Not bad looking for football players, and multi talented for certain.