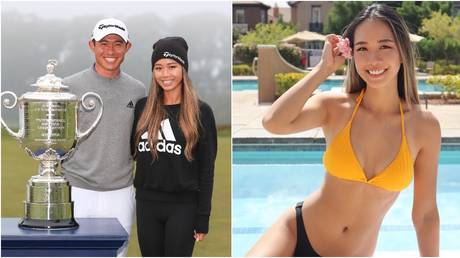 A day after Collin Morikawa won the PGA Championship title, his girlfriend and occasional caddie Katherine Zhu has penned a touching tribute on Instagram, saying he continues to “amaze” her “every single day.”

Morikawa became just the fourth golfer to win the PGA Championship before the age of 24, including a drive on the 16th hole which will live long in the memory, and afterwards said that one of the keys to victory was his self-belief.

“I’ve believed in myself since Day 1,” Morikawa said after claiming the trophy.

“To my family, friends, and the people who believe in me, I simply want to say thank you. We did it!“

It is clear, however, that Morikawa had more believers in him than just himself, after Zhu penned a heartfelt message to him on Instagram.

“You continue to amaze me every single day. I am so happy to see you accomplish a goal that you’ve worked so hard for! I am so proud of you! Congratulations bby,” she wrote on Instagram.

Morikawa pipped Dustin Johnson and Paul Casey to the win, finishing two shots ahead of both and showcasing his impressive array of shot selection en route to the win.

And it is clear that Morikawa, who doesn’t turn 24 until next February, is primed to be a big player for years to come on the tour – and perhaps doubly so if he can keep his apparent good luck charm Zhu nearby.

It’s time to build against pandemics

The new home of Aussie cricketers