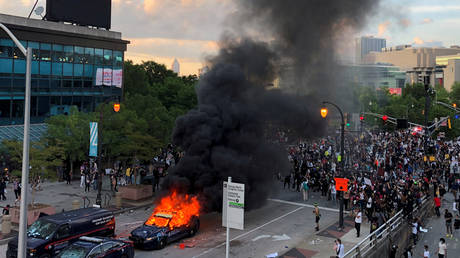 Georgia Governor Brian Kemp has activated National Guard units and declared an emergency as demonstrations in Atlanta escalate into riots and looting, sparked by the police killing of a Minneapolis man earlier this week.

“At the request of Mayor Keisha Bottoms and in consultation with public safety and emergency preparedness officials, I have issued a State of Emergency for Fulton County to activate as many as 500 Georgia Guard troops to protect people and property in Atlanta,” Kemp said in a statement posted to Twitter early on Saturday morning, adding that they would “deploy immediately.”

We will continue to make all state resources available to local leaders during this emergency situation.

Videos shared to social media showed smashed up storefronts and looting in progress around the city, particularly at the Lenox Square shopping mall, where a number of law enforcement helicopters were seen hovering overhead.

Earlier on Friday, a rally elsewhere in the city was dispersed by police, pushing a crowd of demonstrators to the nearby CNN headquarters, where they staged a raucous protest, smashing police cars and windows at the building’s entrance.

A heavy police presence was deployed at the headquarters’ front door to keep the protesters out.

This State Is the Pandemic’s ‘Wonderful Success Story,’ Doctor Says

A mum of five in the United States has divided the internet after sharing her unusual sleeping arrangement on TikTok.

The Lumos Matrix is the ideal urban bike helmet for a smarter, safer day trip