Every mountain top is within reach if you just keep climbing 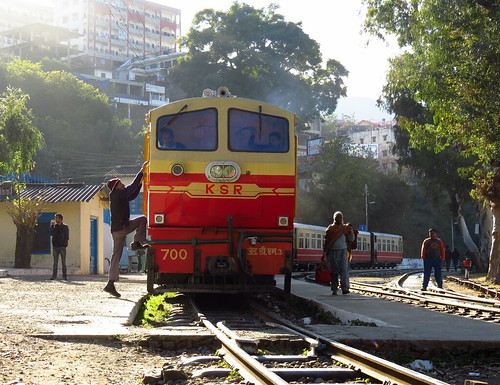 As The glorious rays from the Winter Sun Light up the whole surroundings ,
Kalka Based ZDM3 700 Arrives at Solan for scheduled halt with 52455 Himalayan Queen as an assistant from the railways climbs up to get the token brought from previous station. The train has already climbed 844 metres in altitude in just 44 kms of journey from starting point Kalka. The Kalka – Shimla Railway is an UNESCO World Heritage Site. It is a British Engineering Marvel of the bygone era.

Some Info on Kalka – Shimla Railway :-

The Kalka–Shimla Railway is a 2 ft 6 in (762 mm) narrow gauge railway in North-West India travelling along a mostly mountainous route from Kalka to Shimla. It is known for dramatic views of the hills and surrounding villages.

Shimla (then spelt Simla) was settled by the British shortly after the first Anglo-Gurkha war, and is located at 7,116 feet (2,169 m) in the foothills of the Himalayas. By the 1830s, Shimla had already developed as a major base for the British.It became the summer capital of British India in 1864, and was also the headquarters of the British army in India. Prior to construction of the railway, communication with the outside world was via village cart.

Because of the high capital and maintenance costs and peculiar working conditions, the Kalka–Shimla Railway was allowed to charge higher fares than on other lines. However, the company was still not profitable and was purchased by the government on 1 January 1906 for Rs 1,71,07,748. In 1905 the line was regauged to 2 ft 6 in (762 mm) to conform to standards set by the Indian War Department.

Ordinary local train halts at the Solan Station
This route passes through a city named Solan, which is also known as mini Shimla. A festival celebrating the goddess Shoolini Devi, after which the city is named, is held each summer in June.

In 2007, the government of Himachal Pradesh declared the railway a heritage property. For about a week starting on 11 September 2007, an expert team from UNESCO visited the railway to review and inspect it for possible selection as a World Heritage Site. On 8 July 2008, the Kalka–Shimla Railway became part of the World Heritage Site Mountain Railways of India. Alongside Darjeeling Himalayan Railway, Nilgiri Mountain Railway, and Chhatrapati Shivaji Terminus.

The Kalka–Shimla Railway was built to connect Shimla, the summer capital of India during the British Raj, with the Indian rail system. Now, Shimla is the capital city of Himachal Pradesh and Kalka is a town in the Panchkula district of Haryana. The route is famous for its scenery and improbable construction.

The route winds from the Himalayan Sivalik foothills at Kalka to several important points such as Dharampur, Solan, Kandaghat, Taradevi, Barog, Salogra, Totu (Jutogh), Summerhill and Shimla at an altitude of 2,076 meters (6,811 ft).

TUNNELS
Originally 107 tunnels were built on Kalka Shimla Railway Track and 102 remain in use. The longest tunnel is at Barog. Engineer Colonel Barog dug the tunnel from both ends and could not align them and was symbolically fined one rupee. He couldn’t live with the shame and committed suicide inside the incomplete tunnel.[8] Chief Engineer H.S. Herlington later completed the tunnel with help from Bhalku, a local sadhu.[7][9]

Larger locomotives were introduced in the form of a 2-6-2T, of which 30 were built with slight variations between 1904 and 1910. Built by the Hunslet and the North British Locomotive Company, these locomotives were about 35 tons (35.56 tonnes), with 30" (762 mm) drivers and 14"x16" (355.6 mm x 406.4 mm) cylinders. These locomotives, later classed K and K2 by the North Western State Railways, subsequently handled the bulk of the railways traffic during the steam era. A pair of Kitson-Meyer 2-6-2+2-6-2 articulated locomotives, classed TD, were supplied in 1928. They quickly fell into disfavour, as it often took all day for enough freight to be assembled to justify operating a goods train hauled by one of these locomotives. Shippers looking for a faster service started to turn to road transport. These 68 ton (69.09 tonnes) locomotives were soon transferred to the Kangra Valley Railway, and subsequently ended up converted to 1,000 mm (3 ft 3 3⁄8 in) metre gauge in Pakistan.

The first diesel locomotives on the Kalka–Shimla Railway, class ZDM-1 by Arnold Jung Lokomotivfabrik (articulated with two prime movers), started operation in 1955. In the 1970s they were regauged and reclassified as NDM-1, then used on the Matheran Hill Railway.

In the 1960s, class ZDM-2 built by Maschinenbau Kiel (MaK) was introduced. These locomotives were later transferred to other lines.

Today this line is operated with class ZDM-3 diesel-hydraulic locomotives (522 kW, 50 km/h), built 1970 to 1982 by Chittaranjan Locomotive Works with a single cab road switcher body. Six locomotives of the same class were built in 2008/2009 by Central Railway Loco Workshop Parel with updated components and a dual cab body providing better visibility of the track.

Job of Tenure-line Faculty in the Department of Chemical Engineering