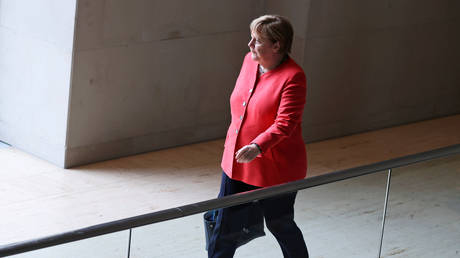 German Chancellor Angela Merkel has said Brussels must prepare for Brexit trade talks with the UK to fail, lamenting that “minimal” progress has been made with London. The deadline to extend the negotiations was July 1.

Speaking to Germany’s lower house of parliament, Merkel said that, while she would “keep pushing for a good solution,” the European Union “must and should prepare for a situation in which an agreement does not happen.”

“Progress in talks is, to put it cautiously, very limited,” said Merkel, who takes over as head of the rotating presidency of the EU Council on Wednesday.

Also on rt.com
‘Stupid’ Merkel & ‘weak’ May: Sources tell CNN how ‘sadistic’ Trump was with female counterparts… but reverential with Putin


Although negotiations between the EU and UK are being accelerated, the fact the deadline to extend them has essentially passed means a deal must now be made in time to be ratified by the end of the year, when the post-Brexit transition period ends.

The British tabloid Daily Express raged at Merkel on Wednesday, calling her a “Brexit bully” for asking negotiator Michel Barnier to warn UK Prime Minister Boris Johnson to take a “more realistic approach” to the talks.

German Ambassador to Brussels Michael Clauss has said there could be a “rough landing” in January if a deal is not made, adding that “it always takes two to tango.” He said the EU member states “won’t accept anything that would bring unfair competition into our house.”

Also on rt.com
Loyalty to US has led Germany & rest of EU into ‘dead end’ & they need to escape – top Russian Foreign Affairs official


If a deal is not reached, trade will be disrupted and standards will revert to those set by the World Trade Organization, with tariffs raised on goods traded between the UK and EU, and potential differences in regulations and safety checks of products.

Merkel said last week that the UK will have to “live with the consequences” of having looser economic ties with the 27-member bloc if it decides against maintaining similar environmental and social standards to the EU.

What Dr. Fauci had to say about Navarro op-ed

Trump stresses COVID-19 should have been contained in China

Qantas will sell some of their in-flight bar carts