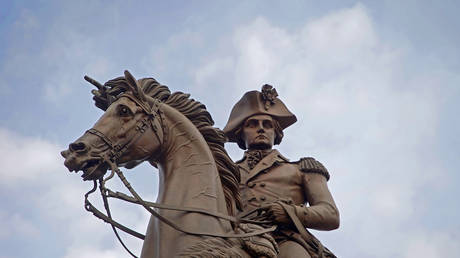 Sen. Tammy Duckworth (D-Illinois) appeared to confirm conservatives’‘slippery slope’ concerns about the tearing down of historical monuments, when she told CNN she is open to memorials to George Washington being removed.

Duckworth, who has been floated as a possible pick for Joe Biden’s vice presidential nominee, took no umbrage with the idea of protesters targeting Washington statues when she was confronted with the idea in a Sunday interview with CNN.

Duckworth added that Trump’s priorities were “wrong,” as he had spent too much time worrying about “dead traitors” and not enough focusing on the Covid-19 pandemic, and had largely dismissed claims by the New York Times that Russia put “bounties” on the heads of US troops in Afghanistan.

Sen. Tammy Duckworth calls Abraham Lincoln and George Washington “dead traitors.” If that’s not a dark, divisive statement, nothing else is. pic.twitter.com/lSP6jda33p

The tearing down of historical monuments has become a common thread of the continuing protests across the nation. Monuments memorializing Confederate soldiers, past presidents, and Christopher Columbus have been vandalized or removed altogether by activists. A statue of former president Ulysses S Grant has even been targeted, despite the fact he led the Union Army in the American Civil War, with critics citing the fact that he married into a slave-owning family and was briefly gifted a slave before setting him free before the war began.

Duckworth’s refusal to push back against Washington monuments being at risk was simply too much for some. “Listen when they tell you who they are,” Spectator USA columnist Stephen Miller tweeted in response to the interview.

Charlie Kirk, founder of conservative student movement Turning Point USA, highlighted the fact that Duckworth could potentially be Biden’s running mate, meaning that, should Biden win in November, the possibility of Washington statues being targeted could be very real.

“Tammy Duckworth, radical Democrat Senator from Illinois and frontrunner to be Joe Biden’s VP, just said she was open to tearing down statues of George Washington. That will be our future if we don’t fight every single day from now until November 3rd to re-elect [Donald Trump],” he tweeted.

Also on rt.com
WATCH protesters go haywire in Baltimore as they knock Christopher Columbus statue & dump it in water (VIDEO)


After sparking outrage on social media, Duckworth appeared to retract her statement in a tweet prompted by the Illinois Republican Party having highlighted her comments. But she first attacked the president for “honoring traitors who took up arms against us in the Civil War to protect their ability to enslave, sell & kill Black Americans.”

She then claimed “this has never been a debate about honoring the complex legacy of those who actually helped *build* our great nation,” despite implying, during her CNN interview only hours before, that it was a debate that needed to be had.

Donald Trump wants to continue honoring traitors who took up arms against us in the Civil War to protect their ability to enslave, sell & kill Black Americans. This has never been a debate about honoring the complex legacy of those who actually helped *build* our great nation. https://t.co/8ptabclgVI

These Two States Are Becoming the Worst COVID Hotspots in the U.S.

Hilary Duff’s husband Matthew Koma gets intimate tattoo of her