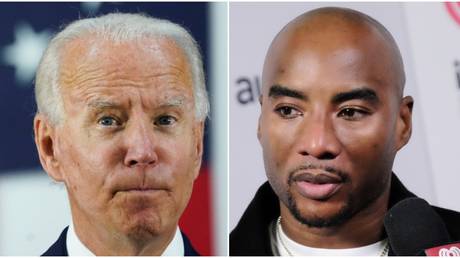 Asked earlier this week about Trump’s use of the term “China virus” to describe Covid-19, Biden responded: “We’ve had racists, and they’ve existed. They’ve tried to get elected president. He’s the first one that has.”

The statement earned the presidential hopeful the “Donkey of the Day” title on Thursday’s episode of the Breakfast Club radio show and inspired a fiery rant from its host, whose real name is Lenard McKelvey.

“I really wish Joe Biden would shut the f*** up forever and continue to act like he’s starring in the movie ‘A Quiet Place’ because as soon as he opens his mouth and makes noise, he gets us all killed. OK?” he said.


Charlamagne tha God went on to ponder “how the hell” Trump could be the first racist president “in a country where 12 presidents before him owned slaves.”

Without acknowledging this fact it would be impossible “to atone for America’s original sins,” the radio host added. He argued that while Trump is “trash,” Biden is no better, and that “old white male leadership has failed America” regardless of party affiliation.

He insisted he would “never be enthused” about voting for Biden unless he chose a black female vice presidential candidate.

Trump’s supporters welcomed the rant on Twitter, suggesting it was a sign that Biden was losing support even among those who he thought he could rely on to support him on the left —  though they conveniently ignored the host’s criticisms of Trump. A Fox News article about the controversial comments was even tweeted by the president’s son, Donald Trump Jr.

Joe Biden continues to receive severe criticism from the African American community, as radio host Charlamagne Tha God names Biden his “Donkey of the Day” and tells the Sleepy One to “shut the hell up.” https://t.co/SOJNb40rWj

Many other tweeters who agreed with Charlamagne tha God’s take on Biden recalled his own cringeworthy interview with the host earlier this year, in which he claimed that African American voters “ain’t black” if they vote for Trump — a comment the former vice president later walked back.

Yet, some on the left were quick to attack the host for daring to speak out against Biden and accused him of being “a secret Trumpster.”

@cthagod is a secret Trumper. He is so obsessed with Biden.

I don’t understand why you don’t just support Joe. No candidate is perfect. But almost every candidate is better than Trump. We need to all rally and support Joe if we’re going to get T out of office!

Some also suggested that his vow to vote for Biden only if he chose a black woman to be his vice president was in itself racist.

@cthagod How the hell you going to to talking about racist and the color of peoples skin and being judged by that and then say you will vote for Biden if he has a Black Woman VP. That’s voting for someone based on the color of their skin. WTF you dumbass.

Consumer Association Says an Increasing Number of People Are Unable to Pay up Their Debts, Calls for Voluntary Debt Arrangements – News