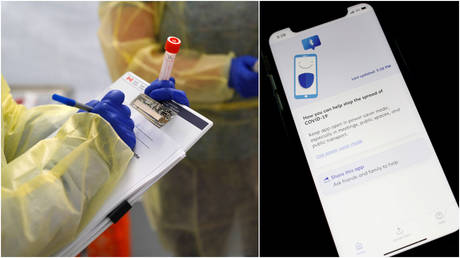 A nationwide coronavirus tracking app is set to launch in Canada, but while the government says its software is fully anonymous, skeptics have raised major privacy concerns, pointing to similarly intrusive programs overseas.

“It will be up to individual Canadians to decide whether to download the app or not, but the app will be most effective when as many people as possible have it,” Trudeau said, stressing that the initiative is voluntary and secure.

Because it’s completely anonymous, because it’s low maintenance, because it is completely respectful of your privacy… people can be confident that this is an easy measure that they can have to continue to keep us all safe as we reopen.

Also on rt.com
US states rush-recruiting Covid-19 contact tracers are overcompensating for their incompetence with authoritarianism


Using Bluetooth technology provided by Apple and Google, the app will alert users when they come in close contact with a diagnosed coronavirus patient, who would also have to use the software, inputting some of their health information. Privacy advocates, however, have cast doubt on the government’s claim that the app is “completely anonymous,” arguing that such software is rarely ever fully secure.

“The Canadian Federal and Provincial governments can’t even prevent hospitals from broadcasting plaintext patient health records across major cities,” Harris added. “There is no history of competent handling of healthcare data to back up any privacy claim.”

Canada is talking about contact tracing apps again, so here is my personal take.First, “complete anonymity” is bullshit, please don’t listen to politicians about the limitations of surveillance systems.https://t.co/8QifFWKw6H

Though the app has already been hailed as an “important” step in the fight against Covid-19, some critics observed that there was yet no evidence that it actually works. Others questioned whether the initiative would be truly voluntary.

We’re still in that phase of tech where people can call tech important or critical without evidence of efficacy. This phase needs to end faster than it’s ending. Narrative is not efficacy and good intentions don’t address accountability.

Pointing out that another contact tracing application was recently banned in Norway over privacy fears, one social media user asked Shopify whether its joint project might have similar issues. The company’s response wasn’t of much help, sending a boilerplate message directing the question to the Canadian government.

Hi, there. The national contact tracing app is owned and operated by the Government of Canada in cooperation with the provinces and territories. Please contact your provincial government for more information. – Tira

Earlier this week, Norway’s Data Protection Authority issued a temporary ban for the Smittestopp – or ‘Stop Infection’ – app, deeming it a privacy violation and ordering federal health authorities to delete all collected data. Similar apps developed in Germany, the UK and elsewhere have also inflamed security concerns. After initially rejecting a contact tracing app, the British government made an abrupt about-face on Thursday, greenlighting software using the same Apple-Google tech as Canada’s model.


Some commenters were far less hostile to the Canadian app, however, saying the software “hits lots of the right points [regarding] privacy” and would help to contain the spread of the lethal virus. One user said the “freakout” over the app was exaggerated and driven by tinfoil hat paranoia.

Hey, it looks like Canada’s contact-tracing app hits lots of the right points re privacy!* the app doesn’t store location data or other personal information* the ledger of people you’ve had contact with will use anonymized codeshttps://t.co/uJU5itWEQO

If anybody is running low on tinfoil, I suggest you grab it now. Conservatives are about to wrap themselves in several layers. The incoming freakout over this is going to be absolutely epic. #cdnpoli#onpoli#COVID19https://t.co/EbDzmw8eK2

New #Covid19 contact tracing app to be released in Ontario on July 2! A collaboration with @apple + @google, it’s a great step forward in Canada’s pandemic recovery! It will alert you if you’ve been exposed to a person who tests positive for COVID-19, allowing you to get tested pic.twitter.com/dkvk8Rdwq6

‘Your conduct was criminally appalling’

A Gold Coast man behind a terrifying airport bomb hoax has been jailed for six years, with a judge saying