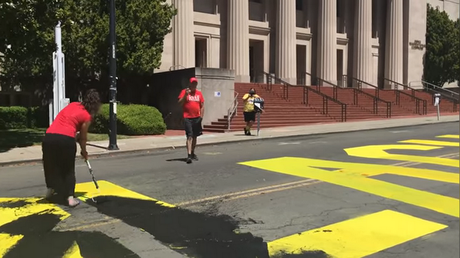 Police in Martinez, California, have asked the public to help them identify a woman, filmed defacing a Black Lives Matter mural, greenlit by the city, while her partner was arguing that the “narrative of racism” is a liberal lie.

The incident took place on July 4th in front of a local courthouse, where a giant yellow-lettered Black Lives Matter slogan popped up earlier that day.

The mural in support of the ongoing protests against police brutality was speedily approved by the city. However, it was in need of an urgent fix only a couple of hours into its existence after a woman, armed with cans of paint and a roller, began slathering black paint over the artwork in broad daylight.

The stunt drew the attention of onlookers, who tried to confront the woman and her companion, sporting a red T-shirt emblazoned with one of the US President Donald Trump’s campaign slogans “Four More Years.”

He then goes on to exchange verbal blows with a female protester, who cannot be seen in the footage.

“You can’t be that stupid, can you?” the protester says, to which the man responds: “No, but you can be.” The female activist then takes another jab at the apparent Trump supporter, saying: “No, I’m not, actually. You are an idiot in this scenario.”

The man’s female companion, who proceeds smearing paint over the letters during the whole back-and-forth, then interjects, telling the protester: “Keep this s**t in f**king New York.This isn’t happening in my town.”

In a statement on Sunday, police said that it “appeared that the couple came to the mural with cans of paint and a roller with the specific purpose of vandalizing over the mural,” asking the public to help them locate the suspects in connection with a “vandalism” investigation.


“The community spent a considerable amount of time putting the mural together only to have it painted over in a hateful and senseless manner,” they said.

The July 4th celebrations this year have been largely overshadowed by Black Lives Matter protests that saw activists marking Independence Day burning the American flag outside of the White House and toppling a statue of Christopher Columbus in Baltimore.

September 18 (BTA) – Bulgaria’s current and capital account showed a surplus of 427.7 million euro in July 2020 against

To fight Covid-19, Africa must reclaim its economic sovereignty