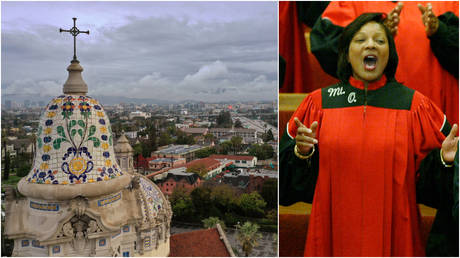 The California state government has issued a directive barring singing and chanting at religious services, citing dangers posed by Covid-19. The order has been condemned as blatantly discriminatory, some even deeming it illegal.

The new mandate, issued earlier this week, “strongly” recommends that all religious gatherings be conducted remotely, but offers additional rules for those who insist on worshiping in person – including the controversial ban on singing, a common practice across a number of faiths.

“Activities such as singing and chanting negate the risk reduction achieved through six feet of physical distancing,” the new guidelines say.

Places of worship must therefore discontinue singing and chanting activities and limit indoor attendance to 25% of building capacity or a maximum of 100 attendees, whichever is lower.

The rule, which also applies to those wearing face coverings, uses stricter language than a prior guideline, stating worshipers “must” adhere to the ban, as opposed to the “strongly suggest” wording in place previously. The move has prompted intense backlash, including from US Senator Ted Cruz (R-Texas), with many arguing the mandate is a clear violation of the US Constitution.

😱😱 This is the text of an actual government order: “Places of worship must therefore discontinue singing….”Grossly, transparently unconstitutional. https://t.co/PmmCe0T9yI

Singing in church is now illegal in California. Even with a mask, you cannot sing in worship to God. This is insane. https://t.co/yny6pwo3eD

While Governor Gavin Newsom responded to anti-lockdown protests with a set of guidelines outwardly discouraging such gatherings in May – sternly warning protesters to “be careful when you see grandma and grandpa” – no similar finger wagging was seen amid a wave of mass demonstrations over the police killing of George Floyd. Instead, Newsom encouraged those protests, saying “To those who want to express themselves… God bless you. Keep doing it. Your rage is real.”

Also on rt.com
US jobs recovery may be short-lived as coronavirus comes back with a vengeance


That clear contrast has drawn charges of double standards when it comes to the two protest movements, as countless officials and health experts waxed apocalyptic about those opposing economic devastation brought by the lockdowns, while ignoring, or even cheering on, the much larger and more widespread George Floyd protests. Similar cries of hypocrisy followed the singing ban.

The “science” that allows for protests but prohibits singing in church is “fake science” that must be rejected. If being outside makes protests safe, then why are beaches being shut down? https://t.co/ofa12FBij8

California Governor @gavinnewsom allows thousands to march and protest but stops singing and prayer in church. Catholics can’t recite mass and evangelicals can’t worship out loud. This is discrimination. The agenda of the left is becoming more and more clear.

California’s Governor just banned singing/chanting at church. Catholics can’t recite mass; Evangelicals can’t worship out loud. The very definition of discrimination is to allow thousands to march and scream without masks while telling churches 100 or less that you cannot sing.

Even as the governor warned of the immense risks posed by July 4 family gatherings earlier this week, on the same day thousands of George Floyd protesters packed into a tight crowd around City Hall in Los Angeles, prompting no comparable warning. As the demonstrations rage on, the state government has reimposed a series of shutdown measures across California to stem a new spike in coronavirus infections, forcing restaurants, museums and other facilities to shift operations to outdoor-only, among other measures. Local governments have followed suit, bringing stricter containment policies in a number of counties.


Now counting the second-highest number of coronavirus cases, behind only New York, California has confirmed more than 247,000 infections and over 6,200 fatalities, according to data collected by Johns Hopkins University. Nationwide, the virus has afflicted nearly 2.8 million, killing more than 129,000.

Coronavirus: WHO warns of ‘no silver bullet’ amid vaccine search

International cricket could reduced to just a couple of World Cups: Shoaib Akhtar

Welcome to ESPNcricinfo’s Rolling Report of the 49th game of IPL 2020, between the Chennai Super Kings and the Kolkata

How CTV Economics Will Shake Out: Rob Norman – Beet.TV