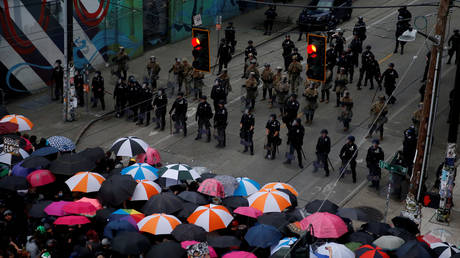 Officers in Seattle, Washington used stun grenades to disperse a crowd of protesters after repeatedly warning them to stop moving a barricade towards the police line. There were unconfirmed reports of tear gas use as well.

Videos from a rally on Pike Avenue and 11th Street show explosions and smoke scattering the protesters around 8 pm local time, along with what some claimed was tear gas.

Police had previously put on gas masks, according to Simone Del Rosario, a reporter with the local TV station KCPQ. She described “what feels like a little tear gas” but later said was pepper spray.

“They keep saying they are committed to maintaining a peaceful protest. It feels less likely that it’ll end that way right now,” Del Rosario tweeted shortly before the explosions.

Another reporter on the scene, Juan Vega de Soto, confirmed the presence of gas masks and noted that protesters had pushed the barrier almost ten meters towards the police line.

Seattle PD repeatedly warning protesters here at 11th and Pine that if they don’t back away from the fencing, this will not remain a peaceful protest. Protesters have moved the fencing up over ten yards in the past few minutes. Gas masks are on. #seattleprotests#seattleprotestpic.twitter.com/a8S1jlC3zj

De Soto did not mention teargas, however, only that flashbangs were used to disperse the crowd.

Chase Burns from the Stranger also captured the moment of the confrontation.

Earlier on Saturday, Seattle PD Chief Carmen Best announced the city would suspend the use of tear gas for 30 days, after concerns were raised over its deployment against protesters. Mayor Jenny Durkan, a Democrat, said there would also be a review of crowd control techniques involving “accountability partners” to “better emphasize de-escalation tactics.”

Over half of US to soon begin reopening amid COVID-19

Full Blue Moon on Halloween: How to see the Hunter’s Moon | Science | News

Pakistan have all bases covered as Zimbabwe come calling