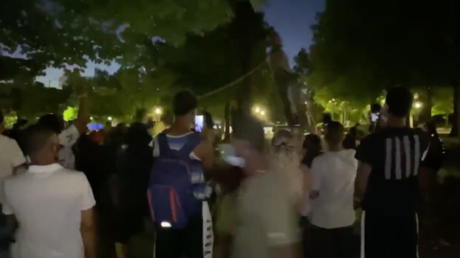 A statue of Charles Linn, a founder of Birmingham who fought for the Confederacy, has been torn down in the center of the city amid rioting. A Confederate obelisc in the same park may become the iconoclasts’ next trophy.

The brass statue of the 17th century businessman was toppled on Sunday night by a group of protesters, who convened in the Linn Park named after the same historic figure. The moment the cheering crowd brought it to the ground was shared by a local correspondent, Jonathan Hardison.

The statue was built in 2013 by a local organization. The protesters covered it with graffiti, according to accounts from the scene.

The statue is part of Confederate legacy targeted by the protesters. Another subject of their wrath, an obelisk-shaped monument erected in 1905 by the United Daughters of the Confederacy, proved to be more resistant to their demolition efforts.

Mayor Randall Woodfin spoke to the crowd in the park asking them to leave and let him finish the job with the obelisk.

Birmingham Mayor Randall Woodfin is now here asking protesters to disperse. He says he’ll finish the job and take it down. pic.twitter.com/KVnQC59E2t

The events in Birmingham park were part of nationwide protests and rioting over the death of George Floyd, who was killed in custody of Minnesota police.

In 2017, Birmingham clashed with Alabama Attorney General’s office over a decision to cover the historic obelisk with plywood and tarp. The legal battle ended last year after the state Supreme Court ruled against the city, ordering the removal of the barrier.

The sky is the limit for Australian cricket’s rising star Cameron Green, according to former Australia Under-19 coach and current

Khloe Kardashian was diagnosed with COVID-19 in early 2020