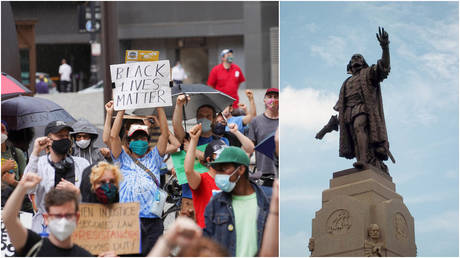 A large group of protesters have besieged a Christopher Columbus statue in Chicago, forcing a convoy of several dozen policemen assigned to guard the monument into retreat after being showered with projectiles and fireworks.

Around several hundred Black Lives Matter protesters descended on Chicago’s Grant Park on Friday, surrounding a towering Columbus statue in a bid to tear it down.

The group – which quickly grew in size, vastly outnumbering the officers who stood guard at the base of the statue – threw bottles, fireworks and other projectiles at law enforcement, eventually forcing police to flee.

Videos filmed at the scene show officers attempting to dodge the objects in vain, as the protesters chant “tear it down.”

As activists were already in the process of pulling the statue down, police back-up arrived at the park in an apparent last-ditch effort to stop the toppling.

I’m at the Columbus Statue in Grant Park Chicago where protestors are shooting off fireworks and chanting “tear it down”, police presence increasing pic.twitter.com/UjROae2hbc

The Chicago Tribune’s reporter on the scene, Alice Yin, tweeted that officers were “pushing people out of the inner circle around the statue.”

More police reinforcements have arrived as a substance (I’m not sure what it is) spreads through the air making people cough. The police are pushing people out of the inner circle around the statue

After a brief standoff on the park grounds, police cleared the way to the statue, which by that point, although intact, was heavily defaced with graffiti.

Erected with funding and support from Chicago’s Italian-American community ahead of the city’s second world’s fair, the 15-foot bronze sculpture by Carl Brioschi has stood in Grant Park since 1933. Friday is not the first time the artwork has met vandalism, however, with activists defacing it last month with spray-painted BLM slogans.

The World Test Championship hasn’t achieved what it was intended

Consumer Association Says an Increasing Number of People Are Unable to Pay up Their Debts, Calls for Voluntary Debt Arrangements – News