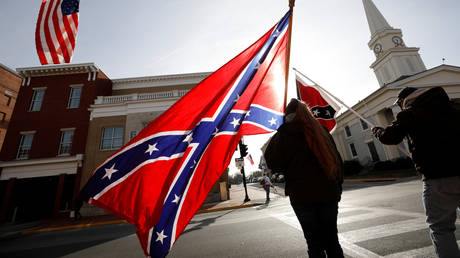 The US Navy has signaled that it will bar public displays of the Confederate Flag on installations, warships and aircraft, mirroring a similar decision by the Marines as protests over police brutality and racism sweep the country.

Chief of Naval Operations Admiral Michael Gilday said on Tuesday that an order is being drawn up to prohibit the controversial flag “from all public spaces and work areas aboard Navy installations, ships, aircraft and submarines,” adding that the move is meant to “ensure unit cohesion, preserve good order and discipline.”

The order is meant to ensure unit cohesion, preserve good order and discipline, and uphold the Navy’s core values of honor, courage and commitment.

The order comes as heated protests continue to rage across the US, sparked by the police killing of an unarmed black man in Minneapolis in late May. While the demonstrations have largely focused on police brutality and its disproportionate impact on African Americans, anger has also been directed at Confederate monuments, which some deem a celebration of slavery and racism. Amid the controversy, the US Marine Corps also barred public displays of the Confederate flag last weekend, arguing the symbol has “all too often been co-opted by violent extremist and racist groups whose divisive beliefs have no place in our Corps.”

The West Indies squad could provide a lucrative source of overseas signings for the BBL, after the competition added scope

Top 5 Paranormal Forums, Discussions and Message Boards You Must Follow in 2020 New Jobs