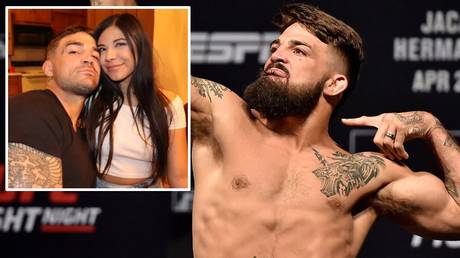 UFC welterweight Mike Perry’s decision to forego traditional coaching and instead rely on the training skills of his girlfriend Latory Gonzalez has been ridiculed online after footage emerged of the two hitting pads together.

Perry caused a stir in MMA circles recently when he announced that Gonzalez, who apparently has very little fight experience, will corner him in upcoming fights after he grew disillusioned with more traditional coaching practices in a run which has seen him drop five of his last seven fights.

Also on rt.com
‘I’m not listening to any coaches right now’: UFC star Mike Perry wants GIRLFRIEND to corner him in future fights


However, fight fans are questioning his decision after the video of Perry’s sparring session with his girlfriend hit the web and questioning whether or not the 170-pound fighter will receive the correct level of training from the coaching novice.

The video, which you can see below, shows Gonzalez and Perry hitting mitts, but Gonzalez seems barely able to keep pace with the fighter nicknamed “Platinum” as she struggles to handle the power of his shots.

Christ have mercy on us.

“Coaches who are saying things that they ain’t gonna go in there and do. They want it to be this way or this way, and like it’s a totally different way. I need a guy like me to hold mitts; I want to hold mitts for myself to be honest with you.

“I can show people a couple of techniques or whatever, and I’m just ready to fight for my life. … Ain’t nobody gonna take this from me.”

Perry’s first assignment under his new coaching regimen will come on June 27 when he returns to the cage to fight Mickey Gall, and he has thanked the UFC for handing him what he says will be an easy challenge.

All my opponents have been top tier for the past 3 years. The best welterweights out there. So I’ve struggled a bit. To have a weak ass opponent like @mickeygall for a real paycheck is a dream come true. Lol thanks @ufc

“All of my opponents have been top tier for the past 3 years,” Perry wrote on Twitter.

“The best welterweights out there. So I’ve struggled a bit. To have a weak ass opponent like Mickey Gall for a real paycheck is a dream come true. Lol thanks UFC.”

Gall last competed in August of last year where he won a unanimous decision against Salim Touahri.