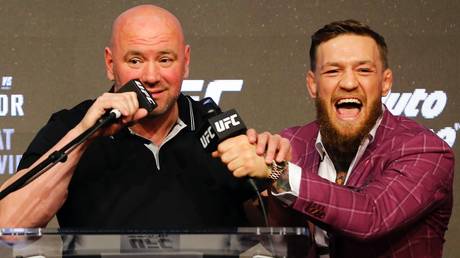 UFC president Dana White has closed the door on a potential blockbuster showdown between Conor McGregor and Jorge Masvidal, saying that the Irish former two-division champion’s “retirement” has ruled him out of contention.

Despite losing his short-notice title bout to Kamaru Usman on “Fight Island,” Masvidal’s status as one of the top draws in the company was reflected in the numbers associated with the UFC 251 card after a giddy White announced to the media that the event was among the most successful in UFC history.


Much of that is down to Masvidal, the veteran fighter who enjoyed a breakout year in 2019 with a trio of high-profile wins against Darren Till, Ben Askren, and Nate Diaz.

With both Masvidal’s and McGregor’s immediate futures uncertain, fight fans have been frothing at the mouth at the prospect of a showdown between the two superstar fighters.

However, despite the prospect of what could be the most profitable fight card in recent history, Dana White has pumped the brakes on any talk of a fight between the pair.

McGregor announced that he was retired (for the third time) via a social media post several weeks ago, but combat sports is well known for retirements sometimes being temporary, and it stands to reason that the Irishman could be tempted back to competition by the sheer weight of the paycheck he would receive from the fight.

White also stated that he was unsure as to whether or not McGregor has withdrawn from the USADA testing pool, something which usually comes shortly after a fighter steps away from the sport.

Fighters must provide at least six months of clean drug tests before being eligible to compete once again.

“People have retired and stayed in the testing pool,” said White.

“It has happened before. And then they get tired of it and bail out of it.”

It remains to be seen whether McGregor truly is retired, or whether he’s simply sitting things out while he waits for a blockbuster offer. With UFC lightweight champion Khabib Nurmagomedov set to face Justin Gaethje later this year, and therefore out of reach for the Irishman, a matchup with Masvidal or Diaz would seem the best route to a colossal payday.

But can the UFC tempt him back during these crowd-free pandemic times?

Rodney King: Camera that captured 1991 beating to be auctioned

Eager shoppers have flocked to Kmart stores across Melbourne to celebrate the city’s long-awaited lifting of coronavirus restrictions. Source link