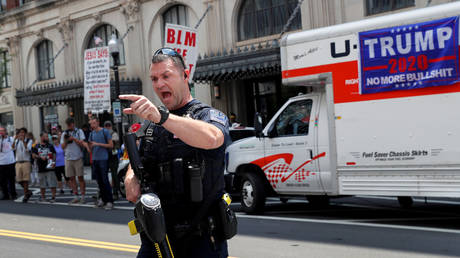 A Black Lives Matter activist has been removed from Donald Trump’s campaign event in Tulsa, Oklahoma. While the protester claimed to have a ticket to the event, the police said letting people in was organizers’ discretion.

A woman donning a black t-shirt reading “I can’t breathe” was removed from the grounds of the rally on Saturday.

The woman was sitting on the ground when police officers approached her and asked her to leave, footage from the scene shows. The protester said she had a ticket for the rally, yet she was promptly cuffed and led away.

“Somebody has to do this.”A peaceful protester is arrested outside the location President Trump’s rally will be held in Tulsa, Oklahoma, on Saturday. pic.twitter.com/Nj23OgyOvX

The woman, identified as Sheila Buck, has been removed from the rally on request of the Trump’s campaign staff, local police said in a statement.

👮‍♂️Arrest Made👮‍♂️This morning at 11:30 am Tulsa Police were requested by Trump Campaign Staff to remove an individual from the secure area of the rally.Tulsa Police spoke to the arrestee, Ms. Buck, for several minutes trying to convince her to leave on her own accord… pic.twitter.com/TWVAtpbm8e

The incident prompted an angry reaction online, with many flocking to the Tusla police social media to condemn their actions. Many accused the force of violating the protester’s 1st Amendment rights.

You don’t seem familiar with the First Amendment. Maybe someone from a northern state could educate you idiots.

Facing the backlash, the police had to further elaborate on the incident, explaining that the protester was in a “private event area” and the campaign staff was in the right to ask people to be removed on their own discretion.

Also on rt.com
US conservatives pull no punches after Susan Rice says Trump & his allies belong on ‘trash heap of history’

The number of coronavirus infections declining in Balochistan and 64 percent patients of COVID-19 have recuperated, quoting provincial health department