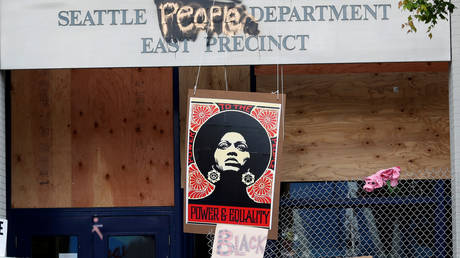 US President Donald Trump has argued that if “people slightly to the right” attempted to occupy a portion of a city – just like protesters against police brutality did in Seattle – they would have been dealt with swiftly.

“Could you imagine if people just even slightly to the right tried to take over Seattle, they’d have machine guns out to get them,” Trump said as he was speaking at a campaign rally in Tulsa, Oklahoma, on Saturday evening.

Trump was referring to the so-called Capitol Hill Autonomous Zone (CHAZ) run by activists in downtown Seattle. The ‘cop-free’ zone, fenced off by barricades, was carved out by a loose collective of Black Lives Matter protesters, socialists and anarchists around a police precinct headquarters in early June.

While attempts to build similar zones were thwarted in Portland, Oregon and Asheville, North Carolina, local authorities in Seattle allowed the activists to run the secessionist enclave unimpeded, with Seattle’s Mayor Jenny Durkan effectively giving her blessing to the activists, describing the outlet as a “summer of love.”

Despite mounting concerns that the CHAZ’s leadership is failing to reign in crime that has been reported to run rampant during the night, the city authorities have been reluctant to take any decisive action against the encampment – even after a shooting left one dead and another with life-threatening injuries at the main entrance to the zone on Saturday morning.


Trump said that he stands ready to assist Washington state Governor Jay Inslee, who he described as “radical left,” in quashing the unrest

I have an offer out – any time you want, we’ll come in, we’ll straighten it out in one hour or less

Taking a swipe at the calls to defund police, which have become a rallying cry of Black Lives Matter protesters across the country, Trump argued that those who support such an idea have lost their mind.

“In Minneapolis the council has already passed it. In Seattle you see what’s going on there it’s even worse…these people are stone cold crazy,” he said, before adding that such things would not happen on his watch (at least on a federal level).

The rally in Tulsa is the first campaign rally held by the US leader after an extended three-month break due to the Covid-19 pandemic.

First virus wave isn't over in the US. It's getting worse.

Jada Pinkett Smith and Will Smith “never ever thought that we would make it back.” Source link