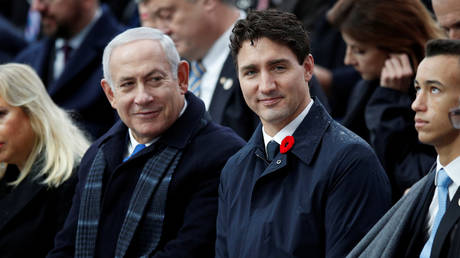 Prime Minister Justin Trudeau is out of touch with Canadians’ views on Israel’s annexation of the West Bank, a survey reveals. As Canada vies for a spot on the UN Security Council, its pro-Israel record may hamper its chances.

A new survey by EKOS Research Associates found that 74 percent of Canadians want Trudeau to oppose Israel’s illegal plans to annex parts of the West Bank, and 42 percent want Canada to impose diplomatic and/or economic sanctions against Tel Aviv.

“This suggests that Canada’s pro-Israel approach to foreign policy is out of touch with the perspective of most Canadians, and is catering to the views of particular political constituencies,” the study’s authors wrote.

Also on rt.com
Netanyahu pushes for West Bank annexation in his fight to avoid jail. But he is setting the Middle East on fire


Israeli Prime Minister Benjamin Netanyahu’s plan to annex one third of the occupied West Bank, which is illegal under international law and opposed by much of the international community, is seen as a further blow to the illusion of a two-state solution, which Canada supports.

While Trudeau has voiced “deep concerns” about Israel’s plans, Canadians have called on their government to take a stronger stance. More than 50 retired diplomats, ambassadors and former cabinet ministers urged the PM to start “speaking loudly and clearly on this issue.”

It isn’t just Canadians who are unhappy with their prime minister’s actions, as over 100 organizations and prominent figures have penned an open letter to UN ambassadors urging them not to vote for Canada in its bid for a seat at the UN Security Council (UNSC) on Wednesday.

Also on rt.com
Twitter up in arms after Trudeau says he’ll ‘continue to condemn BDS’


Trudeau’s government has voted against more than 50 UN General Assembly resolutions upholding Palestinian rights. In 2015, he passed a motion condemning “any and all attempts” to promote the Boycott Divestment and Sanctions (BDS) movement, which calls for the boycotting of products and companies that profit from violating Palestinian rights, as well as cultural and academic institutions. Trudeau has directly linked BDS to anti-Semitism.

During the 2014 war on Gaza, Operation Protective Edge, Trudeau, then leader of the Liberal Party, said Israel had the right to defend itself, and commended its commitment to peace, despite 2,200 Palestinians being killed in the 50-day conflict, which is being investigated by the International Criminal Court in The Hague for potential war crimes.

Canada continues to offer economic and trade assistance to businesses in Israeli settlements. Former foreign minister and current Deputy Prime Minister Chrystia Freeland even went so far as to say that Canada would act as an “asset for Israel” if it were to secure a seat on the UNSC.

Canada needs to secure two-thirds of the vote of the UN General Assembly to win a UNSC seat. Pro-Palestinian activists are now urging members to vote for the other candidates, Ireland and Norway, as they have more favorable views when it comes to Israel’s illegal actions.