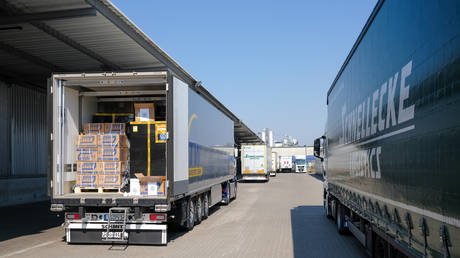 In what looked like a carefully planned carjacking, a vehicle full of face masks went missing in southwestern Germany within just ten minutes – as if to prove that personal protective gear has become the new gold.

The prelude to the brazen theft saw a local driver make a brief stop near the town of Wertheim in the state of Baden-Wuerttemberg. He parked his white Ford van – loaded with a whopping 400,000 protective masks – outside a fast food restaurant and went inside to take a break.

The driver was absent for only ten minutes, but it was enough for the perpetrators to hijack the van and get away undetected. Half a day later, the van was found abandoned in the vicinity, but the masks, of course, were nowhere to be found.


Incidents of this kind are not entirely unique these days. In March, six million masks, ordered by Germany to protect health workers battling Covid-19, mysteriously vanished in Kenya, while in April Spanish police opened an investigation after two million masks were stolen from a local warehouse.

Stocks dragged down by cements, E&Ps amid thin trade