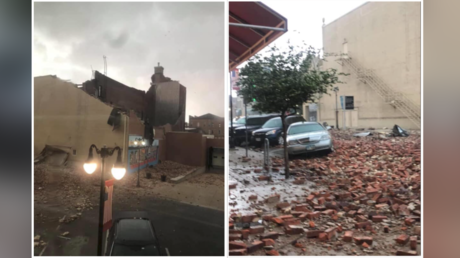 Residents in Sandusky, Ohio, were forced to take shelter as a ferocious storm descended on their town, ultimately demolishing the historic Sandusky State Theater before their very eyes.

The theater, which had stood since 1928, was no match for the storm that struck the town on Wednesday, ripping away entire walls and sections of roof, and raining bricks and debris on the sidewalk and streets below, as seen in stunning eyewitness video.

“Pieces of the roof kind of pulled back, so it was pretty wild and pretty terrifying,” said Kate Botti, who lives downtown in Sandusky.

Miraculously, no injuries were reported, but residents have been advised by police to avoid the area, as the building is unstable, having been torn asunder by the violent thunderstorm.

“Everybody’s had a tough year,” Theater Director Chris Parthemore said. “But Sandusky’s a tough town, and we’ll get through it.”

“I just turned around and there was a brown funnel of bricks as the roof was coming off that thing, so I didn’t sit and stare too long,” said eyewitness Steve Prentice.

The 92-year-old landmark once hosted a performance by former child star, actress, singer and US diplomat Shirley Temple.

WA ‘should send a bill to NSW for billions’

Premier Mark McGowan has hit back at suggestions WA should repay NSW for the cost of quarantining its residents, saying

Shahbaz Sharif should be given home-cooked food, mattress in jail: Lahore court