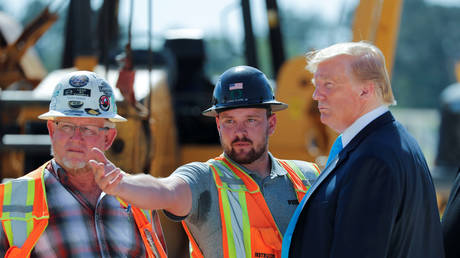 US President Donald Trump has said he sides with the notion that the income gap between billionaires and the rest of Americans has grown too big, vowing to take action “soon” in a tweet, that left his detractors puzzled.

“I actually agree with this. Too much income disparity. Changes must be made, and soon!,” Trump wrote on Saturday, retweeting a Business Insider clip that cites a recent report by the Institute for Policy Studies, claiming that total US billionaire wealth grew by $637 between March and June, while 40 million Americans lost their jobs.

The video takes aim at the successive US governments, including Trump’s one administration, for prioritizing major corporations over small and medium-sized enterprises in anti-crisis packages.

“The Small Business Administration made $349 billion available to small businesses with the Paycheck Protection Program. But like in 2008, $243 million of that was snapped up by large, publicly traded corporations, some of which were valued at over $100 million.”

The clip also appears to take a swipe directly at Trump’s 2017 tax reform, saying that in addition to government assistance and “own resources to profit from during economic upheavals,” billionaires enjoy “wealth-friendly tax laws and loopholes.”

Also on rt.com
Robin Hood in reverse: US billionaires paid lower tax rates than working class in 2018 in latest blow to capitalism


The video specifically mentions Amazon CEO Jeff Bezoz, Zoom CEO Eric Yuan, Microsoft CEO Steve Ballmer, SpaceX CEO Elon Musk as well as multi-billionaire casino magnate and Trump’s donor Sheldon Adelson among those who have seen their fortunes skyrocket at the backdrop of the pandemic, that has proved devastating to small businesses.

Trump’s tweet, which hardly aligns with traditional conservative talking points, has prompted some to suggest that the Republican president has gone rogue, embracing socialist agenda, more becoming to the likes of self-avowed “democratic socialist” Bernie Sanders.

“This guy is trying to make me vote for him,” journalist and self-described social liberal Tim Pool, who supported Bernie Sanders in 2016, tweeted.

The clip cites several solutions to the income gap problem, including an “emergency 10 percent millionaire income surtax,” and a “wealth tax.”

American neoconservative political analyst Bill Kristol even suggested House Democrats come up with “some kind of emergency surtax bill”  to taste the waters.

House Democrats should pass some kind of emergency surtax on the super-rich next week just to see if Trump endorses it and actually pressures Senate Republicans to bring it up. https://t.co/j0NWwXP9iI

While many appeared to be taken aback by Trump’s tweet seemingly in support of progressive agenda, it hardly came out of the blue. Although Trump has stayed away from this kind of rhetoric during his presidency, he proposed a one-time 14.25 percent tax on parts of households’ with net worth exceeding $10 million as far back as in 1999. The measure should have helped to wipe off the national debt, he claimed.

“By my calculations, 1% of Americans, who control 90% of the wealth in this country, would be affected by my plan,” Trump said at the time.


While on the campaign trail for the 2016 elections, Trump promised that he would stick it to the riches, himself included. “It’s going to cost me a fortune, which is actually true,” he said in September 2015, referring to his tax plan proposal, that was supposed to close loopholes on the wealthy, lower overall rates, and free half of Americans from income tax.

Poised for leap before pandemic, women’s cricket limps into future