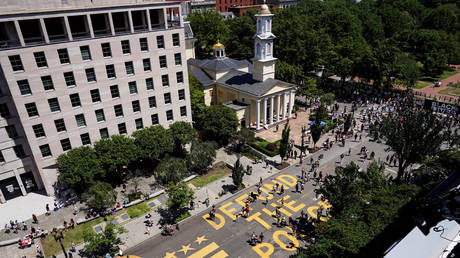 The early draft of the Republican police reform bill that has been leaked to the media seems in tune with mainstream Democrat proposals, while falling short of ‘defund the police’ demands of Black Lives Matter.

The two-page document on the letterhead of Senator Tim Scott (R-South Carolina) was published by CNN on Tuesday. Scott is the only black Republican in the Senate, and was entrusted with drafting the police reform proposal by Majority Leader Mitch McConnell (R-Kentucky) earlier this week.

The Just and Unifying Solutions to Invigorate Communities (JUSTICE) Act consists of ten sections, ranging from conditioning federal funding on reporting requirements and use of body cameras to making lynching a federal hate crime and setting up a “Commission on the Social Status of Black Men and Boys.”

I just finished up a productive lunch discussion on a police reform and retraining package proposal. My colleagues and I will be releasing more details on the draft in the near future. I am hopeful that this legislation will bring much-needed solutions.

Contents of the document published by CNN match what Scott outlined to reporters after the closed-door working lunch on Tuesday. After the lunch, Scott also met with White House chief of staff Mark Meadows and President Donald Trump’s adviser and son-in-law Jared Kushner.

Also on rt.com
‘Stop treating us like ANIMALS and THUGS’: WATCH NY police union boss EXPLODE on politicians and the press


The first section of the JUSTICE Act is named after George Floyd – the African American man who died after a Minneapolis police officer knelt on his neck for nearly nine minutes last month, sparking the protests and riots that have swept the US since – and Walter Scott (no relation to the senator), another black man killed by police in South Carolina in 2015.

The second is named after Breonna Taylor, the emergency medical technician killed by Louisville, Kentucky police in March during a no-knock warrant search targeting her boyfriend.

Section 3 would expand federal grants to have police departments hire officers “who have racial and ethnic characteristics similar to their community.” Sections 4 and 5 focus on the use of body cameras; Section 6 talks about preservation of records.

Sections 8 and 9 would establish commissions on “Black Men and Boys” and “a comprehensive review of the criminal justice system” in the US. Section 10 would condition federal funding on “required training on alternatives to uses of force and deescalation tactics.”


Section 7 appears to be Scott’s long-time proposal to define lynching as a federal hate crime. Though it has won overwhelming support in the US House of Representatives and 99 senators, last week Senator Rand Paul (R-Kentucky) objected, calling it poorly written and open to misinterpretation and abuse.

“This bill would cheapen the meaning of lynching by defining it so broadly as to include a minor bruise or abrasion,” Paul had said on the Senate floor. “Our national history of racial terrorism demands more seriousness of us than that.”

No local virus cases in NSW

Who will be SAS Australia’s top warrior woman?

Princess Diana in The Crown: Fashion, style icon of the ages