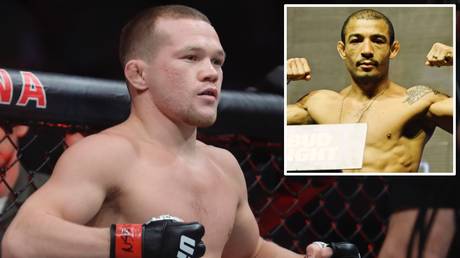 Russian star Petr Yan will lock horns with Jose Aldo at UFC 251 next month to determine the organization’s next bantamweight king but long before they were rivals, Yan says he was a guest of Aldo’s at a UFC event.

Yan, who holds a perfect 6-0 record in the UFC, will have to defeat the challenge of one of the company’s most respected former champions if he is to realize his goal of claiming the 135-pound title. But long before their rivalry began to flourish, the situation between Yan and Aldo was considerably cooler.


Yan took to social media on Thursday to recall being invited to attend UFC 198 event headlined by Stipe Miocic’s heavyweight title win against Fabricio Werdum by Aldo and his coach, Andre Pederneiras.

“I’m at UFC 198 tournament in Brazil,” Yan wrote on social media, alongside an image of him sitting in the crowd.

“By the way, a ticket was given by Jose Aldo and his coach Andre Pederneiras. Which MMA tournaments have you been on? Which one was the most memorable?“

Yan will have an opportunity to create further memories when he takes on Aldo on July 11 at the UFC’s first “Fight Island” event at Abu Dhabi’s Yas Island.

The fighter nicknamed “No Mercy” has been highlighted as a potential future UFC champion since his days in the ACB promotion, and is just one month away from fulfilling that immense potential.

Against him, though, will stand the most experienced high-level opponent of his career. Despite coming into the fight on the back of a two-fight skid, Aldo’s career in the cage is a legendary one.

Prior to having the featherweight championship prised from his grasp by Conor McGregor, the Brazilian had an unprecedented era of success, going undefeated through a decade of competition before the Irishman’s left hand brought his dominance to a close.

Also on rt.com
‘I’ll paddle to the fight if I have to’: Russian bantamweight star Petr Yan responds after being handed UFC title shot


While Aldo regained the featherweight title once it was stripped from McGregor (before losing it to Max Holloway), the Brazilian has since dropped to the bantamweight division in search of adding a world title in a second weight class.

Yan, though, will come into the fight with his own motivation of becoming his division’s standout fighter, and it’s probably fair to suggest the two rivals won’t be gifting tickets to each other for the foreseeable future.

An 11-month-old baby has miraculously escaped death after being a passenger in a car that veered off the road, killing