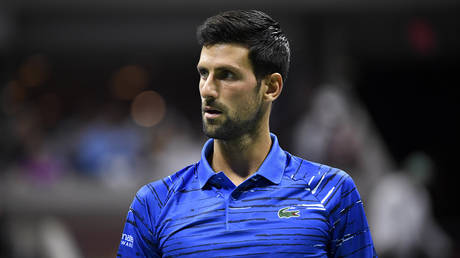 World number one Novak Djokovic has questioned the coronavirus safety protocols in place for the US Open, calling the measures “extreme.”

The 33-year-old Serbian has won the tournament three times, but is unhappy at the concessions players are expected to make for the hard court Grand Slam, which is set to get underway on August 31 at New York’s Flushing Meadows.

Speaking to Prva TV in his home country, he said “we would not have access to Manhattan, we would have to sleep in hotels at the airport, to be tested two or three times per week.

“Also, we could bring one person to the club which is really impossible. I mean, you need your coach, then a fitness trainer, then a physiotherapist.”

Also on rt.com
‘I have the right to express my views’: Djokovic defends anti-vaxxer stance after Covid-19 comments cause stir


The 17-time Grand Slam champion added: “I had a telephone call with the leaders of world tennis, there were talks about the continuation of the season, mostly about the US Open due in late August, but it is not known whether it will be held.

“The rules that they told us that we would have to respect to be there, to play at all, they are extreme.”


Earlier this week in a media call, world number two Rafael Nadal was skeptical at the idea of traveling to New York, saying he has no intention of defending his title until every player is able to travel safely.

The professional game has been deferred until the end of July at the earliest.

Also on rt.com
Nadal says entire 2020 season should be SCRAPPED as 19-time Grand Slam winner laments players ‘losing a year of our lives’

Opposition likely to be delayed APC over Shehbaz Sharif’s illness

Suncorp warns Australia is not prepared for summer filled with an onslaught of natural disasters.