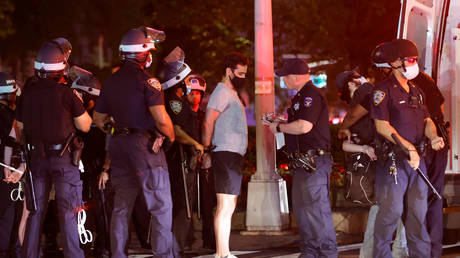 Both chambers of the New York state legislature have voted to repeal a measure that mandates police disciplinary records are kept from the public, sending the proposal onto the governor’s desk for approval.

New York’s Senate and Assembly both passed a measure to repeal section 50-a of the state’s Civil Rights Law on Tuesday, which places a sweeping ban on the release of “all personnel records” used to evaluate police performance. Under the current law, such records can only be made public with a court order or express permission from the officer in question.

Insisting she and her fellow lawmakers are not “anti-police,” Assembly Majority Leader Crystal Peoples-Stokes (D-Buffalo) said they were merely “anti bad police” in explaining her vote to repeal the measure.

Also on rt.com
NYPD cop charged after footage shows him SHOVING 20yo to the ground, calling her a ‘stupid fu***g b**ch!’


New York Governor Andrew Cuomo has already vowed to sign any bill that alters or repeals section 50-a, all but ensuring it is passed.

Anti-police brutality activists argue the law, and others like it elsewhere, help to protect officers accused of wrongdoing and prevent the public from discerning a potential pattern of misconduct.

The move is part of a package of 10 reform bills recently put forward in New York – including one that would ban police chokeholds – amid nationwide protests over police violence, sparked by the killing of George Floyd in late May at the hands of a Minneapolis officer.

Also on rt.com
‘Stop treating us like ANIMALS and THUGS’: WATCH NY police union boss EXPLODE on politicians and the press

Minneapolis Police Department ‘Rotten to the Root,’ Can’t Be Reformed

NSW has recorded two new cases of coronavirus in the community, while there were 10 cases in hotel quarantine. Source

Keanu Reeves spotted with a shaved head in Berlin | Photos