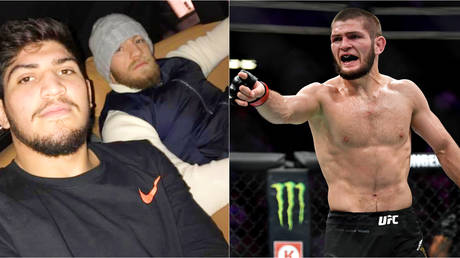 Conor McGregor teammate Dillon Danis has publicly vowed to take revenge on Khabib Nurmagomedov’s camp after rewatching footage of the scrap that saw both sides heavily sanctioned following their clash at UFC 229 in October 2018.

The incendiary post-fight brawl after the headline fight between lightweight champ Khabib and Irish nemesis McGregor threatened to overshadow the momentous bout between the fierce rivals, spilling into the crowd as the Russian leapt from the cage to confront members of McGregor’s entourage.

Danis, a world-class grappler who has been part of McGregor’s camps since 2016, has previously claimed that Nurmagomedov failed to make contact with an attempted kick at him, but reacted testily to footage that appeared to show him being attacked by two of the Russian’s party.

“Revenge will be sweet,” Danis wrote in response to a clip in which Khabib’s teammate and fellow UFC fighter Islam Makhachev seemed to punch the back of his head before one of the lightweight champion’s managers, Rizvan Magomedov, also appeared to connect.

The 2-0 Bellator welterweight added the hashtag “cowards” to his now-deleted response, stoking a torrent of ripostes to the American who describes himself as an “icon” and had posted footage of himself massaging a sunbathing woman’s backside earlier this week.

“As cowardly as the others,” wrote one UFC fan who called the scenes on the night “pathetic,” while others claimed the American deserved the blows for his almost constant barbs at other fighters on social media, including calling potential opponent Jorge Masvidal “my b*tch until further notice” this week.

As cowardly as the others. Pathetic behaviour that night

Nurmagomedov critics have argued that the rancour between the two camps did not justify the nature of the apparent attacks, which also saw McGregor trade blows in the cage with members of the Russian team.

“No matter what the circumstances, never hit a man from behind,” insisted one.

No matter what the circumstances never hit a man from behind. I’m sure it’s just your allegiance our dislike for @dillondanis talking but dude sucker punching is just plain wrong and even more so when it’s a trained athlete delivering the punch .

“I’m sure it’s just your allegiance or dislike for Dillon Danis talking, but sucker punching is just plain wrong – even more so when it’s a trained athlete delivering the punch.”

Giving his version of the wild scenes earlier this year, Danis claimed he had landed several times on Nurmagomedov but did not mention being struck in the “mayhem” that “just happened so fast.”

He recently claimed McGregor would “make that rat pay” in a rematch with Nurmagomedov and posted threats that Makhachev had purportedly sent to him, adding that he had received no reply after sending back footage of the brawl in response.

He briefly broke off from abusing fellow competitors to express his happiness over news that Nurmagomedov’s father, Abdulmanap, had woken from a coma.

Also on rt.com
‘He was just trying to run away’: Conor McGregor’s teammate Dillon Danis lifts lid on UFC 229 brawl with Khabib Nurmagomedov

Trade deficit narrows 35pc in May on resurging exports

Status of women in Pakistan

On today’s update we have the latest Covid-19 figures, the UAE travel guidelines and a Dubai judge says tenants under