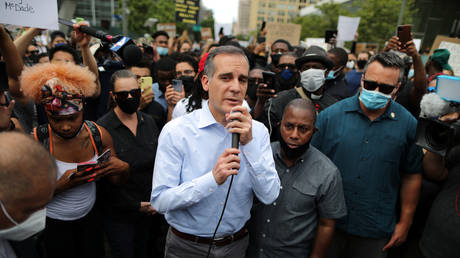 Los Angeles Mayor Eric Garcetti is warning citizens to avoid Fourth of July celebrations during the Covid-19 pandemic, yet is fully in support of Black Lives Matter (BLM) protests and was even pictured at one not wearing a mask.

“We’re going to have to celebrate differently this year. Everyone should cancel plans with others for the 4th of July. You shouldn’t gather with anyone who doesn’t live in your household,” Garcetti tweeted on Friday.

He followed up on the actual holiday with multiple tweets doubling down on his warning.

“Happy Fourth. Please stay home and avoid gatherings with others. And don’t forget your face covering,” he wrote.

Happy Fourth. Please stay home and avoid gatherings with others. And don’t forget your face covering.That’s it. That’s the tweet.

What makes the “save lives” sentiment behind the tweets sound hollow is the fact that Garcetti has supported people gathering in public for BLM protests. He’s even celebrated them doing so.

“If you’ve been to a protest, thank you for making your voice heard and supporting the cause of racial justice,” the mayor tweeted last month, telling demonstrators it’s perfectly acceptable to gather in public as long as they quarantine themselves afterward and get tested for Covid-19.

I fully support @CityAttorneyLA‘s decision not to prosecute or seek punishment for those who broke curfew or failed to disperse during the recent protests, unless those cases involve violence, vandalism or looting.

The seeming hypocrisy has understandably earned Garcetti plenty of critics, many openly defying his order.

“Your request is denied due to Americans’ liberty,” actor and Los Angeles resident Adam Baldwin tweeted at the mayor.

To make matters worse, responses to Garcetti’s tweets have included multiple pictures of himself at a Black Lives Matter protest, no face mask in sight.

Nice mask wearing, Mr Mayor. Oh that’s right everyone is magically immune at protests. But hey no 4th of july party for the commoners. pic.twitter.com/mfo2MP34lT

Plenty of politicians have found themselves accused of not practicing what they preach during the Covid-19 pandemic, like New York City Mayor Bill De Blasio who fit in a trip to a public gym in March right before an order from the governor shutting such establishments down went through — meaning he would have known the “dangers” of doing so before going.

Like Garcetti, De Blasio and others have also shown support for BLM protests despite continually talking up the risk of public gatherings at the moment.

No notable change in COVID-19 cases after reopening of educational institutions: Dr Sultan