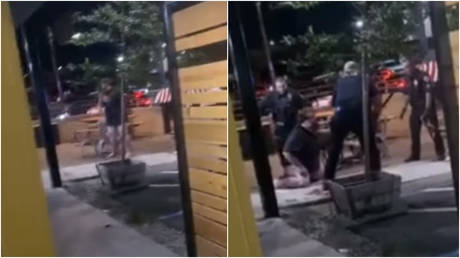 A California man who was captured on video biting off chunks of his own flesh during a confrontation with police has died in custody. Five officers have been placed on leave after the shocking incident.

The 37-year-old man, identified as Morgan James Davis, passed away on Tuesday following an encounter with law enforcement less than an hour prior, the Sacramento Bee reported. Police responded to a “possible domestic disturbance” at a motel in the city of Redding early on Tuesday morning, finding Davis half-naked and in an extremely agitated state.

In footage published to social media by the Redding Police Department, the man is seen briefly walking toward the officers before a loud popping noise is heard – presumably a non-lethal bean bag round. Seemingly unfazed, Davis then began “biting his own arm, tearing into his skin, and spitting chunks of flesh on the ground,” according to a police account of the incident. At one point, a bystander is heard exclaiming in horror: “He’s eating himself!”

Though police said in a news release that Davis had “feigned a charge at the officers,” the footage – which was captured by a witness staying at the same motel – appears to show the man slowly walking toward them before efforts are made to subdue him. Police say they used a taser device, a bean bag round, a police K9 and baton strikes before Davis was fully detained.

After being handcuffed and receiving medical attention, Davis died some 32 minutes later. Police did not elaborate on the cause of death, however, saying only that he experienced “medical difficulties” after the confrontation, but added the man appeared alert while communicating with paramedics on the scene.


Five Redding officers were put on administrative leave following the confrontation, as is mandated by department policy when a suspect dies in police custody.

While it remains unclear what triggered the incident, police said illicit drugs – including LSD, cocaine and methamphetamine – were found in Davis’ motel room, all of which are known to induce psychotic episodes in some habitual users.

19 science-backed ways to reduce your risk of Alzheimer’s disease, from reading to playing chess

Where the Qld election will be won

In the final week before Saturday’s Queensland election, record numbers of voters have already had their say at the ballot