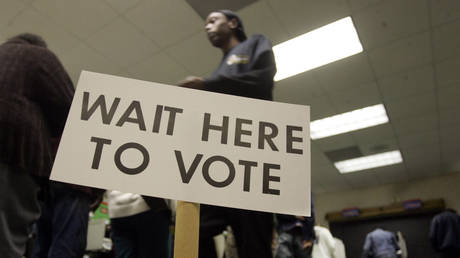 Georgia officials have vowed to investigate the state’s electoral processes after primary voters were discouraged at every turn, with hours-long waits, voting machine issues, closed polling places, and a lack of absentee ballots.

“Everything that could happen or go wrong has gone wrong so far,” Fulton County Board of Commissioner Chairman Robb Pitts told local media, describing his county’s cascade of failures as the result of fewer voting precincts and absentee ballot issues.

The rollout of new voting machines across the state brought with it major headaches, introducing paper ballots for the first time in 18 years. Manufactured by Dominion Voting Systems, the new machines were acquired earlier this year after activists sued the state, charging the previous machines were not secure. The old system left no paper trail at all, while the new Dominion machines print paper ballots with a record of the voter’s selection that are then scanned.

However, Georgia officials – including the Secretary of State – defended the machines as complaints began pouring in Tuesday morning, blaming the snarls on “user error” and insisting despite all reports to the contrary that poll workers and voters were just confused. After hours of insisting the only problem was that some machines had been delivered to the wrong precinct, statewide voting implementation manager Gabriel Sterling apparently deleted a tweet claiming the voting was “going great” in most of the state.

Following two hours of replies to furious citizens where he made excuses and blamed Fulton County, Georgia Secretary of State COO @GabrielSterling deleted his tweet that said “voting is going great” in most of the state. pic.twitter.com/iqqGa9EUk8

Casting about for someone to blame, Sterling accused those counties experiencing issues of “engaging in poor planning, limited training and failures of leadership.” Indeed, some poll workers acknowledged they were being trained on the job after last-minute hires, with many having quit previously due to the coronavirus. The manpower shortage forced the state to close 10 percent of its polling places, relocating some 10,000 voters.

Also on rt.com
Donald Trump is completely right about mail-in ballots – they are the easiest route to a RIGGED ELECTION


While the pandemic and the ongoing protests against police brutality – factors beyond any election official’s control – certainly contributed to the snarl at voting booths statewide, plenty of voters claimed they had requested but not received absentee ballots. Since they were in the system as having received absentee ballots, they were unable to vote using the machines and had to fill out provisional ballots.

Several would-be voters complained to reporters they’d been in line for over four hours, while former Atlanta mayor Kasim Reed accused one precinct of “deliberately slowing down the number of folks who will vote today.”

Once again, this is at the Sandtown precinct in South Fulton County. Folks are not being allowed to vote. Period. What is going on here? But we will persist and make sure our votes get cast. They appear to be deliberately slowing down the number of folks who will vote today. pic.twitter.com/gqFSVqrUEn

Political candidates who caught wind of the snafu reportedly demanded voting hours be extended, while angry voters called for the resignation of county elections officials. The failure of the absentee ballot system was a particular black eye for Georgia, which had encouraged residents to vote by mail due to the pandemic. The state had the dubious distinction of postponing its primary – originally scheduled for March – twice because of Covid-19.

Bella Hadid says her Lyme disease symptoms have worsened since she turned 18, with daily headaches, joint pain, and chronic fatigue

Throughout August and September, millions of acres across California were ablaze following an “unprecedented outburst of dry lightning in August