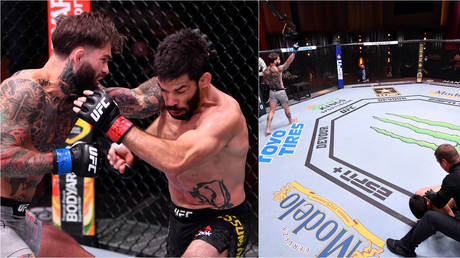 Cody Garbrandt emphatically backed up his claim that he has rediscovered his passion for fighting by brutally knocking out bantamweight foe Raphael Assuncao with a colossal right hand at UFC 250, earning Performance of the Night.

Garbrandt ended a run of three losses and secured his first win since he beat Dominick Cruz at the end of 2016 by producing a peach of a punch in the final seconds of the second round in Las Vegas, condemning Assuncao to a prolonged stay on the octagon canvas before he was eventually helped to his feet following a concussive end to his own hopes of recording a first victory in four fights.

The veteran Brazilian had left himself open while trying to land a right-hand haymaker of his own, seeing Garbrandt duck and rise as the seconds seemed to stand still before he landed his thunderous reply and calmly strolled away to celebrate.

“It feels amazing,” said the man known as “No Love”, reflecting on the challenges he has faced since losing the title at UFC 227 in November 2017 in the first of two losses to nemesis TJ Dillashaw, followed by a first-round knockout defeat to Pedro Munhoz that earned Fight of the Night at UFC 235 in March 2019.

“I went from the top of the world, 11-and-0, a 25-year-old world champion to a three-fight skid. It’s been a journey. I’ve got the passion back in my heart and the mentality to be the best in the world, like I once was.

“I knew [Assuncao] was going to come in. I let him get a little confident, I bridged the gap with my distance. I hit him with some hard stuff. He was really biting on the dips.

“He is so defensive, so hard to look good against. I needed him to come a little bit more and I knew the right hand would land. Those are my money-makers. It feels so good, I could start crying.”

Fans on social media were unanimous in admiring the timing and power of “Garbrandt 2.0”, with some calling for the 28-year-old to earn another title shot after his eye-catching redemption.

Cody Garbrandt 2.0 is here. Cody really needed that one. Impressive performance from the former champ. The speed he posses is insane! #UFC250

“Cody really needed that one,” said one viewer.

“Impressive performance from the former champ. The speed he possesses is insane.”

COVID-19 is still accelerating and its effects will be felt for decades: WHO

Topless David Beckham shows off his tan in Versace swimming shorts on holiday with Romeo, Cruz and Brooklyn in Greece