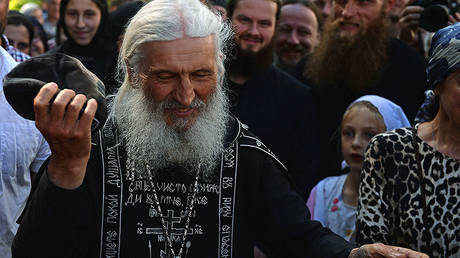 The Ekaterinburg ecclestiastical court has defrocked the infamous cleric Shiigumen Sergius, after a series of controversial comments and disobeyed orders. The priest also took control of a convent, removing the abbess in charge.

“In connection with the violation of the priestly oath, monastic vows, and sacred canons, the Shiigumen Sergius (Romanov Nikolay Vasilyevich) is to be expelled from the Holy dignity,” said Nikolay Maleta, the chairman of the court.

Before becoming a priest, Sergius was a police officer and had previously spent 13 years in prison for murder. In mid-June, he was banned from preaching, after calling Covid-19 a “pseudo-pandemic,” claiming it was an excuse to microchip the public. He also complained that the precautionary closing of churches was done under pressure from “the atheistic authorities.”“Whoever encroaches on the closing of temples, may he and all his family be damned,” he said.


As well as propagating wild conspiracy theories, Sergius is known for using anti-Semitic language in his sermons, referring to the “protocols of the Elders of Zion” and suggesting Jews be evicted to the “Republic of Birobidzhan [sic],” the capital city of Russia’s Jewish Autonomous Region, and its Semitic heartland.

Despite being prohibited from doing so, Sergius returned to the Central Urals Convent, near the city of Ekaterinburg. There, he assumed control, ousted the abbess and several nuns, and organized a guard of loyal parishioners and Cossacks to prevent local religious leaders and journalists from entering.

According to recent media reports, the convent is now home to about 200 people, including some children. The former priest is accused of being psychologically and physically abusive to them.

Also on rt.com
Russian cleric SEIZES CONTROL of convent after being censured for calling Covid-19 an excuse to ‘chip population’

A mutation shows why the coronavirus is such a formidable foe

Singer LeAnn Rimes has shared “unabashedly honest” nude photos on social media, revealing in unflinching detail her experience with the

Covid-19 effect – he was ‘a bit confused’ at the start of IPL 2020, admits Mumbai Indians’ Quinton de Kock