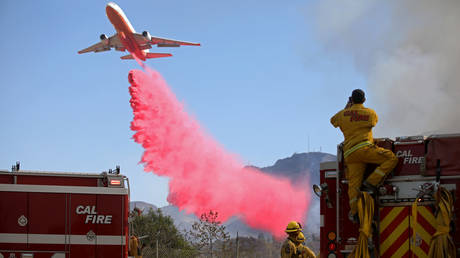 Residents in Solano County, California have been ordered to flee their homes after a large vegetation fire broke out just miles from two cities. Firefighters are using aerial retardants to protect neighborhoods.

The blaze broke out Saturday near the cities of Winters and Vacaville, and quickly doubled in size to 1,200 acres, authorities told local media. Officials said the fire has been five percent contained.

Those living in the fire’s direct path have been ordered to evacuate to a center in Vacaville. Firefighter units have deployed planes to drop aerial retardants in an effort to protect residential areas.

We continue to monitor a fire that’s spreading near Quail Canyon Road & Pleasants Valley in Solano County. At last check, the #QuailFire has burned 1200 acres and is 5 percent contained, according to CAL Fire. Evacuations are also underway. Tune in at 10 for a live report @FOX40pic.twitter.com/BnYeI6IC3f

Footage shows the hills near Winter glowing from the deep orange blaze. In another clip, huge billows of smoke rise up from the affected area.

So far there have been no reports of casualties.

Top 15 Procrastination Podcasts You Must Follow in 2020 New Jobs

Man shot by police in front of family