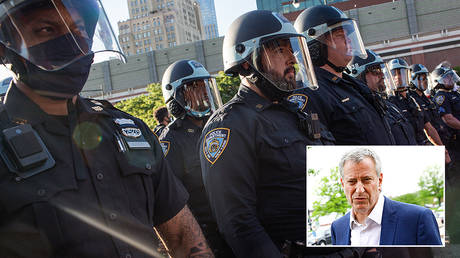 New York will be shifting funds from the police to youth groups as part of reforms, Mayor Bill de Blasio announced, saying the Big Apple’s citizens “need to be reached, not policed.”

“We committed to move resources from the NYPD to youth and social services as part of our City’s budget,” de Blasio wrote on Twitter amid ongoing violent protests in New York and many other US cities, provoked by the death of African American man George Floyd in police custody in Minneapolis, Minnesota in late May.

“Our people need to be reached, not policed,” the mayor said, insisting that it would still be possible to keep New York safe.

This morning we committed to move resources from the NYPD to youth and social services as part of our City’s budget. Our young people need to be reached, not policed. We can do this AND keep our city safe.

In another statement, de Blasio explained that the move is part of “deeper reforms” needed to tackle the “profound disparities” in the city.

He didn’t specify how much funding will be taken from the police and redirected, only saying that the “details will be worked out in the budget process in the weeks ahead.”


‘Defund the police’ has become one of the main slogans of the protestors in the US. It became especially popular this week after a group of celebrities, including John Legend and Jane Fonda, signed a petition calling for police funding to be withdrawn.