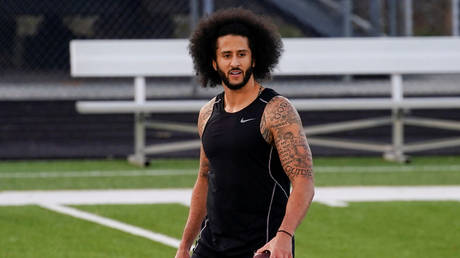 Ex-San Francisco 49ers quarterback Colin Kaepernick has signed with Disney to produce a documentary about his life for ESPN Films. His growing net worth isn’t sitting well with those sick of his victim persona, however.

While no dollar amount was given regarding the first-look docuseries deal, it’s safe to say that the agreement – which includes “scripted and unscripted stories that deal with race, social injustice and the quest for equity” and will “work to showcase directors and producers of color” – has the potential to make Kaepernick a very rich man (though as the face of Nike, he’s presumably loaded already).

The agreement extends across all Disney’s platforms including Walt Disney Television, ESPN, Hulu, Pixar, and ESPN’s racial-issues-focused spinoff The Undefeated. Kaepernick announced his “historic partnership” with the entertainment megacorporation on Monday in a somewhat stilted statement, promising “many other culturally impactful projects” aside from the documentary series on his transition from up-and-coming quarterback to civil rights activist. The series will focus on the last five years, starting with his “taking a knee” during the national anthem in 2016 to protest police brutality and continuing through his exile from the NFL and rise to social justice stardom.


The athlete is partnering with former ESPN host Jemele Hill, who left the network in 2018 (accompanied by a $5 million golden parachute) to write about politics for the Atlantic after her anti-Trump tweeting became too much for the network. Apparently, they have had a change of heart – as has the NFL with Kaepernick. The league’s commissioner Roger Goodell suggested last month that a team should sign the former San Francisco QB.

Many on social media rolled their eyes at what they saw as Kaepernick wringing millions of dollars out of his supposed “oppression,” including former Trump administration official Sebastian Gorka, who likened “one of the richest sportsmen in America…complaining about racial division” to a “bad Monty Python skit.”

Colin Kaepernick is the face of Nike, last week he signed a deal with Netflix, today he announced a partnership with DisneyNike, Netflix, and Disney are three of the largest companies in America by revenueRemind me again how “oppressed” he is?🤔

Others snarked that they were getting whiplash from the quickness with which Kaepernick had stashed his principles to work with the big-dollar media conglomerate.

Disney celebrated July 4th.Kaepernick says July 4th is a celebration of white supremacy.Today, Disney announced a partnership with Kaepernick.So Kap gets $$$ off white supremacists.And Disney gets woke points from an America-hater. pic.twitter.com/RUhEBvm5am

And others had less than complimentary things to say about the former quarterback’s athletic prowess.

Next thing you know there will be a Colin Kaepernick ride at Disneyland. The ride will consist of sitting on a bench for 60 minutes.

Anyone else find it weird how Kaepernick only became ‘oppressed’ once his stats started tanking and he got benched?

Even those who took no issue with Kaepernick’s decision had a few chuckles at his expense, with one commenter noting he “pretends not to be shrewed [sic] businessman using the ‘black experience’ to build his wealth.”

Of course, not everyone was critical. Fellow celebrities congratulated the footballer on his success.

This is amazing. And so well deserved.

At least someone is willing to sign him.The things that don’t break you make you stronger. The very thing for which the league tried to punish Kaepernick is accruing to his benefit. Meanwhile, the league is struggling to reopen.https://t.co/DFsODRgapy

Yuge difference! WaPo corrects Trump on most ‘dangerous’ cities, says not all, but 17 OUT OF 20 are run by Democrats — RT USA News