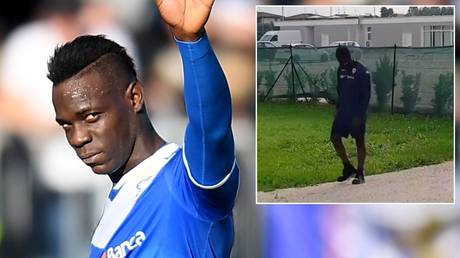 Controversial Italian striker Mario Balotelli added another chapter to his eventful career as he was turned away at the gates of Brescia’s training ground.

Balotelli had been out of action due to a bout of gastroenteritis, but he looked to return to training and resume his preparation for the return of Serie A matches.

But when he arrived at the gates of the training ground he was stopped by a security official, who spoke with the player before Balotelli returned back to his Mercedes parked in the car park and drove off.

Officially, Balotelli’s refused entry was due to him not having a valid medical certificate. That, reportedly, is set to come into effect on Wednesday.

All Serie A players are required to present valid medical documentation as part of the league’s stringent regulations designed to help get the sport back up and running following the COVID-19 pandemic.

And as Balotelli didn’t have the required medical documentation all players need to have upon arrival at training, he was promptly sent away.

But, despite his paperwork mishap, the at-times troubled striker had already found himself on the bad side of Brescia’s owner Massimo Cellino, who reportedly decided to terminate Balotelli’s contract after a number of training no-shows by the player. Balotelli was still in the first year of a three-year contract with the club.

That sacking has not officially been confirmed, and it interesting to see what will happen if he returns to training on Wednesday with his paperwork in hand.

Theatre Royal Plymouth: ‘I don’t know what I’d be doing without it’

Palmer’s millions: Can he swing ballot?